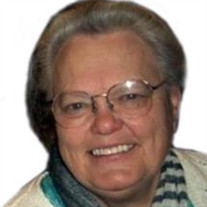 Gena LaDea Schnacker, 79, of Sumner passed away Saturday, August 8, 2020, at her home. Services will be at 10:00 A.M. Saturday at Horner Lieske McBride & Kuhl Funeral and Cremation Services in Kearney with Leslie Pountney and Warren Taylor officiating. Due to current health-related mandates, the funeral service will be private, but will be live-streamed by the family on Gena Schnacker’s Facebook account. Public graveside services will follow at the Sumner Cemetery in Sumner, Nebraska. Visitation will be 5-7 P.M. Friday at Horner Lieske McBride & Kuhl Funeral and Cremation Services. Memorials are suggested to the Sumner Rescue Unit. Please visit www.hlmkfuneral.com to leave a tribute or message of condolence. Horner Lieske McBride & Kuhl Funeral and Cremation Services are in charge of arrangements. Gena was born on November 11, 1940, in Sumner to Paul C. and Beulah M. (Cramer) Johnson. She attended Sumner high school and graduated with the class of 1958. She married Ron Schnacker on September 5, 1959, in Sumner. Ron and Gena began their married life in Omaha where Gena began her nurse’s training. After moves to Harlan, Iowa; Lexington, Nebraska; and Cozad, Nebraska, Ron and Gena moved their family to Sumner, Nebraska in 1969. She raised her family while helping Ron farm and, later, after the children were grown, worked for over a decade at Good Samaritan Hospital as an environmental technician. Gena was a member of a nondenominational church and chose to serve the Lord early in her life. She was beloved by her church family, and her life and testimony was an inspiration to many. Surviving relatives include her children; Tracy Schnacker and his wife Kathleen of Topeka, Kansas, Cris Schnacker and his wife Marta of Colorado Springs, Colorado, Becky Rieken and her husband Paul of Dakota City, Nebraska, Perry Schnacker and his wife Janet of Shawnee, Kansas and Layne Schnacker and his wife Amy of Amherst, Nebraska; sister, Marlys Pearson (James); brother, James Johnson (Irene); 12 grandchildren; two great-grandchildren; and numerous extended family members and friends. She was preceded in death by husband, Ron; her parents; and one brother, Paul (Bud) Johnson.

Gena LaDea Schnacker, 79, of Sumner passed away Saturday, August 8, 2020, at her home. Services will be at 10:00 A.M. Saturday at Horner Lieske McBride & Kuhl Funeral and Cremation Services in Kearney with Leslie Pountney and Warren Taylor... View Obituary & Service Information

The family of Gena L. Schnacker created this Life Tributes page to make it easy to share your memories.

Send flowers to the Schnacker family.