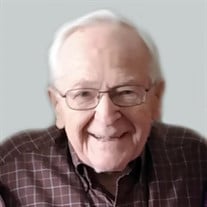 George M. Sadler, 86 of Kearney, died Friday, November 6, 2020 at C.H.I. Health Immanuel Hospital in Omaha. Funeral services will be 10:30 a.m., November 12, 2020 at Horner Lieske McBride & Kuhl Funeral and Cremation Services with Pastor Dean Pofahl officiating. Burial with military rites provided by the Nebraska National Guard Funeral Honors Team, Kearney American Legion Post #52, and Kearney V.F.W. Post #759 at Kearney Cemetery will follow the service. Visitation will be from 5:00 to 7:00 pm, November 11, 2020 at the funeral home and one hour prior to the service. The family requests that those attending the visitation or the service wear masks and follow social distancing guidelines. Memorials are suggested to the family to be designated later. George was born January 16, 1934 in Kearney to George William and Mae (McCall) Sadler and was the oldest of two children. Growing up in Kearney he was known as “Markie” to the people on his Hub route. He graduated from Kearney High School in 1952. During his Trades and Industry class, he worked at Baumgartner’s Variety Store. His career ended there when he was drafted in the U.S. Army May 1, 1956. He spent two years in Augusta, Georgia as a Signal Corp Instructor. He received his Honorable Discharge May 1, 1958. George began a 20-year career at Rockwell International in Kearney. When the plant closed in Kearney, he spent time in Raleigh, North Carolina assisting them with the move. George returned to Kearney and worked at Coleman Powermate. Coleman Powermate was forced to reduce workers, and George then developed his wood-working skills. He built his workshop, where many fine pieces of cabinetry were created. George was loved by the people he worked with. George was baptized in the First Presbyterian Church in Kearney and was a life member there. He served as an usher and assisted in sponsoring Junior High Fellowship. He was a member of the Cosmopolitan Club, Toastmasters Club, and the carving club. George is survived by his wife, Erma Sadler of Kearney; daughter Teri and Marcus Ditchman of Kearney; brother, Chuck and Pat Sadler of Lincoln, NE; and many nieces and nephews. George was preceded in death by his parents.

The family of George M. Sadler created this Life Tributes page to make it easy to share your memories.

Send flowers to the Sadler family.