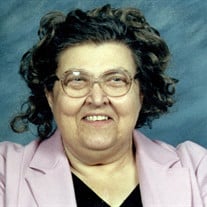 Georgia Mae Fetterley died Sunday August 12, 2018 at 4:35 PM at Firesteel Healthcare Center in Mitchell, SD. Her daughter Kathleen Miedema, her son Walter Fetterley, and his wife Carolyn Calomeni were all at her bedside. The memorial service will be 9:30 a.m., September 22, 2018 at Horner, Lieske, McBride & Kuhl. Internment will follow at Kearney Cemetery. Born December 14, 1935 in Kearney, Nebraska, She spent her childhood there, graduating from Kearney Longfellow High School in 1953. She entered Nebraska Wesleyan University in Lincoln that fall. There she met Walter “Russell” Fetterley the following year. They married August 11, 1955. To this union were born four children, two girls and two boys. Russ and Georgia put their educations on hold while rearing their children. They lived in Lincoln, Nebraska where Russ worked as an electrical substation operator. While in Lincoln, Georgia formed and led the first Cub Scout den for Handicapped boys in Nebraska outside of a state institution in the Belmont area of Lincoln. She also wrote numerous human-interest stories for The LincolnLand Sun. They attended St. Luke’s Methodist Church in Belmont. Moving to Highmore, SD November 1969, Georgia’s husband then accepted a position at what is now the Department of Energy Electrical Sub-station near Crow Creek. In Highmore, they were active in the Grace Bible Church. Here, they finished raising their family. Russ also continued serving in the Naval Reserve Construction Battalion—Sea Bees. He retired from Navy Reserves in 1985 as Petty Officer 1st Class. Moving to Toccoa Falls, Georgia in August 1979, Russ and Georgia finished their educations. He received his BS in Bible and Theology May 1986. Georgia received her degree in Mass Communication. Russ often teased her, “You already knew how to communicate —biggest waste of money I ever spent.” After graduating in May 1986, they returned to live in Nebraska until August 2007, when they entered Firesteel Healthcare Center in Mitchell, SD. She and her husband, Russ, entered Firesteel nursing home in 2007. While there, she founded the “Firesteel Chatter” (a small newspaper) and Participated in the Nazarene Bible Study there. Georgia enjoyed her children, grandchildren, great grandchildren, gardening, reading, crocheting, and writing special interest articles, poetry and short stories. Some of her writing has been published in the “Lincolnland Sun” “The Kearney Daily Hub”, “The Highmore Herald”, “The Alliance Witness”, “Nebraskaland”, and “Firesteel Chatter.” Georgia was preceded in death by Her husband Russ Fetterley, her father, George L. (Bud) Gifford; her mother, Millie Tobler Gifford; three brothers, Ed, Robert, and Michael Gifford, and a sister-in-law, Kathleen Collins Gifford Grateful to have shared her life are: Son, Bud Fetterley and Bud’s wife, Carolyn Calomeni of Boise Idaho: Daughter, Kathleen Miedema and her husband, Phillip of Mitchell SD; Son, Gifford Fetterley of Papillion, Nebraska; Daughter, Rebecca Stone; six grandchildren, two great grandchildren and many friends.

Georgia Mae Fetterley died Sunday August 12, 2018 at 4:35 PM at Firesteel Healthcare Center in Mitchell, SD. Her daughter Kathleen Miedema, her son Walter Fetterley, and his wife Carolyn Calomeni were all at her bedside. The memorial service... View Obituary & Service Information

The family of Georgia Fetterley created this Life Tributes page to make it easy to share your memories.

Send flowers to the Fetterley family.