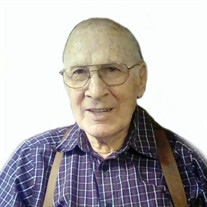 Gerald Dorris, 87 of Kearney, passed away Wednesday, December 16, 2020 at the Good Samaritan Society in Ravenna. Memorial services will be on Monday, December 21, 2020 at 10:00 a.m. at Horner Lieske McBride & Kuhl Funeral and Cremation Services in Kearney. Rev. Melody Adams will officiate. Military funeral honors will be provided at the funeral home by the Kearney American Legion Post #52, the Kearney V.F.W. Post #759 and the Nebraska National Guard Funeral Honors Team. Burial will be on Tuesday, December 22, 2020 at 1:00 p.m. MST at the Arthur Cemetery in Arthur, NE. There will be no visitation. Memorials are suggested to the family, to be designated later. Please visit www.hlmkfuneral.com to leave a tribute or message of condolence. Horner Lieske McBride & Kuhl Funeral and Cremation Services are in charge of arrangements. Gerald was born on April 14, 1933 in Ogallala, NE to Laurence and Alice (Shaw) Dorris. He attended Arthur County Schools where he participated in Football and Basketball and would later graduate with the class of 1952. He enlisted in the United States Army in 1953 and was sent to Fort Belvoir in Virginia for basic training and equipment repair school. He was later sent to the Central Depot at Fort Richardson in Alaska and finally to Fort Lewis in Washington where he was honorably discharged. After the Army, Gerald moved to Los Angeles where he worked for UPS for two years. He then enlisted into the United States Air Force where he served at Luke Air Force Base in Arizona, Iceland and also ENT Air Force Base in Colorado until his honorable discharge in 1962. He married Jacqueline Kinslow Tucker on October 12, 1961. Gerald and Jackie lived in many different areas including Oregon, Wyoming and Nebraska as Gerald worked as a Heavy Equipment Mechanic for John Deere, Allis Chalmers, Massey Fergusen and others. He would retire in 1989. Jackie passed away in 1997 and Gerald moved back to Nebraska to be closer to family. He met and would later marry Helen J. Crow Hickenbottom on July 31, 1999 in LeMoyne, NE. The couple would eventually make their home in Kearney. Gerald enjoyed fishing, traveling with Helen and collecting artifacts. Surviving relatives include his wife, Helen of Kearney; step-children and spouses, Jerry and Kathy Hickenbottom of Kearney; Dick and Joyce Hickenbottom of Holdrege, NE and Sandra and Dick Remmenga of Kearney; brothers and sisters in law, Stan and Phyllis Dorris of Pueblo West, CO, Melvin and D’Ann Dorris of Geneseo, KS; sister, Orma Jean Hawkins of Bend, OR; sister in law, Ramona Dorris of Lemoyne, NE; several nieces, nephews, cousins and other extended family and friends. Gerald was preceded in death by his parents; first wife, Jacqueline; brother, Wilton Dorris; and brother in law, Don Hawkins

The family of Gerald F. Dorris created this Life Tributes page to make it easy to share your memories.

Send flowers to the Dorris family.