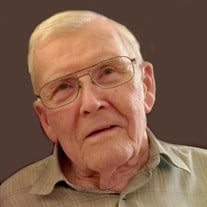 Gerald Byrum (Gerry) Fowler, 99, of Kearney passed into the presence of his Lord on January 25, 2020, at Mount Carmel Home Keens Memorial in Kearney. Funeral services will be 10:30 a.m., Friday, January 31st, 2020 at the Kearney eFree Church, 4010 7th Avenue, with Pastors Adrian Boykin and Brian Klein officiating. Visitation will be one hour prior to the service, from 9:30 a.m. to 10:30 a.m. Following services and lunch, burial will be at 1:00 p.m. at the Kearney Cemetery with Military Rites provided by the United States Army Funeral Honors Team, Kearney American Legion Post #52, and Kearney V.F.W. Post #759. In lieu of flowers, memorials may be made to the Kearney eFree Church and online condolences may be made at www.hlmkfuneral.com. Horner Lieske McBride & Kuhl Funeral and Cremation Services is in charge of arrangements. Gerald was born on October 18, 1920 in his family home in Kearney, NE, to Ethel M (Hastings) Fowler and Walter Byrum Fowler. Soon after finishing school in Kearney he met his lifetime love, Ruth E. Nicholas. On June 28, 1942 Ruth and Gerry were married at the First United Methodist Church. Only about two weeks after their wedding, Gerry was called up to serve in the Army in World War II. From June 12, 1944, to the end of the war, Gerald served as a communications sergeant whose unit fought their way through Normandy, Paris, Belgium, Germany, and Czechoslovakia. He was awarded the Bronze Star. After the war, Gerald and Ruth resided in Kearney where he worked at the Kearney Creamery (Blue Bell Dairy) for several years. He later worked for other companies until late retirement from facilities management at Kearney eFree Church. Gerry’s life has been characterized by faith, love and generosity. More than one friend has said about Gerald, he was ‘… a godly man whose very life is a testimony of walking in faith with the Savior he loves…’ He is survived by his wife Ruth of 77 years; sons John (Barbara) Fowler of Kearney, Robert (Beryl) Fowler of Atlanta, GA; five grandchildren: Joshua (Charlene) Fowler, Katy (Nate) Wiens, Laura (Tony) Stuht, Megan (Justin) Merritt, Ben (Caroline) Fowler, and nine great grandchildren. Gerald was preceded in death by his parents and sister, Helen Fowler Munson.

Gerald Byrum (Gerry) Fowler, 99, of Kearney passed into the presence of his Lord on January 25, 2020, at Mount Carmel Home Keens Memorial in Kearney. Funeral services will be 10:30 a.m., Friday, January 31st, 2020 at the Kearney eFree Church,... View Obituary & Service Information

The family of Gerald 'Gerry' B. Fowler created this Life Tributes page to make it easy to share your memories.

Gerald Byrum (Gerry) Fowler, 99, of Kearney passed into the presence...

Send flowers to the Fowler family.