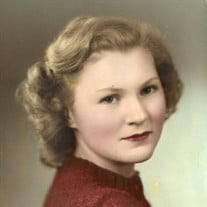 Geraldine ‘Jerri’ L. Mears, 89, of Kearney, formerly of Ogallala, passed away Tuesday, June 11, 2019 at Brookdale Northridge in Kearney. Memorial services will be Friday, July 19, 2019 at 1:30pm, at Horner Lieske McBride & Kuhl Funeral and Cremation Services in Kearney. Rev Alan Davis will officiate and burial will be at Kearney Cemetery. Memorials are suggested to the First United Methodist Church in Ogallala, and Kearney, and AseraCare Hospice of Kearney. Please visit www.hlmkfuneral.com to leave a tribute or message of condolence. Services are under the direction of Horner Lieske McBride & Kuhl Funeral and Cremation Services of Kearney. Jerri was born July 21, 1929 in Grand Island, NE to William and Marie (Olson) LaCornu. She grew up in central Nebraska and graduated from Longfellow High School in Kearney, in 1947. She attended college at Kearney Normal School. On May 28, 1950 she married Wendell B. Mears in Kearney. The couple moved to Ogallala in 1952, where they lived for their entire marriage, and raised their two daughters, Kathryn Sue and Julie Ann. In 1958 she began working for First National Bank in Ogallala, until her retirement in 1993. Her husband died in 2013 and she moved to Kearney in 2014. Jerri was a 60-year member of First United Methodist Church, United Methodist Women in Ogallala, holding several offices in the Women’s Sub Unit and Women’s Society. She was a long time member of the Shifty Dozen Extension Club, RSVP, Friends of the Library, and Ogallala Country Club (West Winds). She loved music and enjoyed attending musical performances. She sang with Sweet Adeline’s in Ogallala for several years. Hobbies included gardening, walking, swimming aerobics, golf, bridge, and reading, traveling, shopping, and baking. Getting together with family was very important. She was a thoughtful, loving mother and grandmother, generous in spirit, kind, and unassuming. Surviving relatives include daughters Kathy Elliott and husband Bob of Denver, CO and Julie Saalfeld and husband Paul of Kearney; granddaughter, Kate Elliott of Castle Rock, CO; grandsons, Bryan Saalfeld and wife Jamie of Colleyville, TX and Aaron Saalfeld of St. Louis, MO; nieces and nephews Terry Clarno, Patty Bolling, and Jan Clarno of Ft. Walton Beach, FL and Candy Hower of Boca Raton, FL Jerri was preceded in death by her loving husband, Wendell, and her sister, Dorothy Clarno.

The family of Geraldine "Jerri" L. Mears created this Life Tributes page to make it easy to share your memories.

Send flowers to the Mears family.