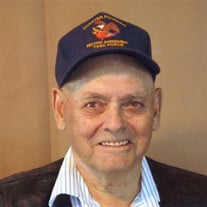 Harold T. Cepel, 86, of Gibbon, passed away Thursday, November 26, 2020 at his home. Funeral services will be on Tuesday, December 1, 2020 at 10:30 a.m. at Horner Lieske McBride & Kuhl Funeral and Cremation Services in Kearney. Pastor Dean Pofahl will officiate and burial will be at Kearney Cemetery. Visitation will be on Monday, November 30, 2020 from 4:00 p.m. – 6:00 p.m. at Horner Lieske McBride & Kuhl Funeral and Cremation Services in Kearney. Memorials are suggested to the Gibbon Volunteer Fire and Rescue. Please visit www.hlmkfuneral.com to leave a tribute or message of condolence. A recording of the service will be placed on the website. Horner Lieske McBride and Kuhl Funeral and Cremation Services are in charge of arrangements. Harold T. Cepel was born on April 3, 1934 in rural Buffalo County, NE to John R. and Gladys L. (Fuqua) Cepel. He attended Kearney High School and graduated with the class of 1952. After high school, he married Joan M. Smallcomb on September 30, 1953 in Kearney. Joan would later pass away in 1993. He later married Lula Reed on August 1, 1997 in Kearney. A man of many talents, Harold made a living as a salesman, tractor mechanic, motorcycle mechanic, welder, fabricator, machinist, toolmaker for Baldwin Filters, and gunsmith. From his travels with the Farmers Union State Exchange, he knew almost every town in Nebraska. He built and installed recoil absorbers, adjustable stocks, and release triggers for trap guns. There was nothing mechanical he couldn’t master. Harold also had many hobbies and interests including drag racing, hunting, motorcycle riding and racing, lead guitarist for a country & western band, and trap shooting. He and Al Stover were pioneers in the early days of drag racing in Kearney. One of his proudest accomplishments was being selected as a Line Chief on the Technical Inspection Crew for the National Hot Rod Association 1958 national finals in Oklahoma City. He was also proud of wife Joan who often beat him in the quarter-mile! In later years, Harold and Lula enjoyed traveling together to the southwest, to local country music festivals, and to visit relatives. Harold was a lifetime member of the NRA. Surviving relatives include his wife, Lula Cepel of Gibbon, NE; sons, Kenneth and Julie Cepel of Kearney; Tom and Darlene Cepel of Columbus, NE; Jeff Cepel and Stacey Hollens of Sterling, NE; daughter, Janell and Kenneth Macek of Gibbon, NE; grandchildren, Brian (Jodi) Macek, Brad Macek (Carisa Van Horn), Jay Cepel, Lindsay Cepel (fiancé Kenny Rosno), Shayna Cepel, Sierra Cepel, Brandon Cepel and Nicole Cepel; 3 great grandchildren; 3 step daughters; 6 step grandchildren; 14 step great grandchildren; several other extended family members and friends. Harold was preceded in death by his parents; 1st wife, Joan Cepel; sister and brother in law, Darlene and Don Munson.

The family of Harold T. Cepel created this Life Tributes page to make it easy to share your memories.

Send flowers to the Cepel family.