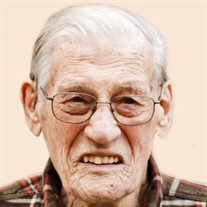 Harold O. Kaiser, 92, of Kearney, passed away Saturday, May 4, 2019 at Kearney Regional Medical Center. Memorial services will be 11:00 AM, Thursday, May 9, 2019 at Zion Lutheran Church in Kearney with the Pastor James DeLoach officiating. Inurnment will follow at 2:00 PM at Prairie Home Cemetery in Holdrege with military honors provided by the United States Air Force Military Honors Team and Martin-Horn American Legion Post #66. Memorials are suggested to the family, to be designated later. There will be no visitation. Please visit www.hlmkfuneral.com to leave a tribute or message of condolence. Arrangements are under the direction of Horner Lieske McBride and Kuhl Funeral and Cremation Services in Kearney. Harold was born on the Rosebud Reservation in Parmelee, South Dakota on April 28, 1927 to Joseph and Bertha (Schmidt) Kaiser. He was baptized on May 29, 1927 at St. John’s Church. Harold received his education in Parmelee. As a teenager, he moved to Bayard, Nebraska where he worked as a semi driver hauling cattle. Harold joined the Air Force and was honorably discharged in 1950. He moved to Scottsbluff, married Barbara Peterson in November 1951, and had three children. They moved to Denver, where Harold worked at a meat packing facility. Harold then moved to Central City and worked for Randy’s Meat Company. There he met Helen “Sue” Dugger. They were married April 2, 1977. Harold adopted Sue’s two daughters. Their family lived in North Platte, Grand Island, Loomis, Holdrege, and Kearney. During this time, Harold drove semi for Rainbow Bread Company, worked for Loomis Co-op, and provided maintenance for Arby’s. He enjoyed feeding the birds and yelling at the squirrels, talking to his grandchildren about life on the reservation, and watching old John Wayne movies and Chuck Norris shows. Harold is survived by his wife of 42 years, Sue, his children, Melody Kaiser of Thornton, Colorado, Steve (Veronica) Kaiser of Arvada, Colorado, Vicki (Jim) Merz of Mesa, Arizona, Glenda (Mike) Asp of Holdrege, Nebraska, Mary (Ryan) Dickinson of Ogallala, Nebraska, fourteen grandchildren, sixteen great-grandchildren, and three great great-grandchildren. He is preceded in death by his parents, brothers Arvin, Arnold, Theodore, and sisters Deloris and Eunice.

Harold O. Kaiser, 92, of Kearney, passed away Saturday, May 4, 2019 at Kearney Regional Medical Center. Memorial services will be 11:00 AM, Thursday, May 9, 2019 at Zion Lutheran Church in Kearney with the Pastor James DeLoach officiating.... View Obituary & Service Information

The family of Harold O. Kaiser created this Life Tributes page to make it easy to share your memories.

Send flowers to the Kaiser family.