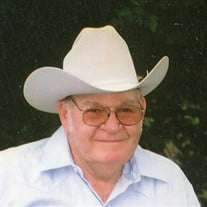 Harry H. Wempen, 90, of Sumner, died Saturday, October 12, 2019 at his home. Funeral services will be 10:30 am, October 17, 2019 at Grace Lutheran Church in Sumner with Pastor Vic Rasmussen officiating. Burial with military rites will follow the service at the Sumner Cemetery. Visitation will be 5:00 to 7:00 pm, October 16, 2019 at Horner Lieske McBride & Kuhl funeral and Cremation Service in Kearney and one hour prior to the service Thursday at the church. Memorials are suggested to the Grace Lutheran Church. Harry was born October 23, 1928 on the family farm near Sumner to Herbert and Cynthia (Wingert) Wempen. He was baptized and confirmed at Trinity Lutheran Church in Amherst. He attended Lone Star Rural School. Harry married Reva Steinhauser on September 2, 1952 in Holdrege. He was drafted into the Army on December 2, 1952, attending basic training in Fort Sill, Oklahoma, and then serving in Korea until October 21, 1954. After the service Harry and Reva lived southeast of Sumner, where he ranched, raised sheep, hogs, and owned a dairy farm for over thirty years. He loved his horses and had registered Quarter Horses and Paints, belonging to the American Quarter Horse Association and American Paint Horse Association. He enjoyed attending rodeos and showing his “trick” horses. Harry used to raise Grey Hounds for the track and was a member of the Grey Hound Association. Harry was a 4-H member and leader and started the dog obedience class in Sumner. He loved hunting coyotes and coons. He was a member of the Grace Lutheran Church in Sumner and is an honorary member of the Sumner Saddle Club. Harry was one of the first members to start the saddle club in 1950 riding with the drill team. Harry is survived by his wife Reva of Sumner, NE; Son Terry Wempen and wife Pam of Sumner; daughters, Janet Furry and Pam Handy of Gresham, NE, Nancy Welsh of Shelby, NE, Cindy Elliott and husband Jeff of Garden City, KS, Joyce Wempen and Charlie Ripp of Sumner, NE; brother, Lenard Wempen of Mexico; sister, Lucille Lang of Lincoln, NE; grandchildren, Parry Siebenaler and wife Lisa, Carmen Wempen and Dean Pelowski, Jason Cranwell and wife Jordan, Andrew Lopez and Miranda Sealey, Stacy Lopez, Cara and Shay Stephens, Katherine Dornes and husband Brad; 15 great grandchildren Harry was preceded in death by his parents, sisters, Opal Freeze, Viola Provolt, Bernice Volmer, Ruth Schnacker, Pearl Schnacker, son-in-law, Jim Welsh.

The family of Harry H. Wempen created this Life Tributes page to make it easy to share your memories.

Send flowers to the Wempen family.