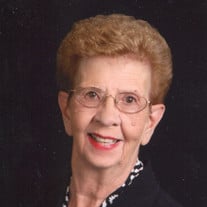 Helen L. Arnold, age 84, of Kearney, passed away Tuesday, January 14, 2020 at her home. Funeral services will be on Tuesday, January 21, 2019 at 1:00 p.m. at Living Faith Fellowship Church in Kearney. Pastor Joel Stark will officiate and burial will be at Kearney Cemetery. Visitation is planned for 1 hour prior to services on Tuesday at the church. Memorials are suggested to AseraCare Hospice in Kearney or to the family. Please visit www.hlmkfuneral.com to leave a tribute, memory or condolence. Horner Lieske McBride & Kuhl Funeral and Cremation Services in Kearney is in charge of arrangements. Helen was born on October 8, 1935 in Grand Island, NE to Lloyd R. and Inez (McKnight) Beliel. She attended school in Grand Island and graduated from Grand Island High School in 1953. She married Robert D. Arnold on December 24, 1953 in Grand Island. When Bob completed his service in the U.S. Army, the family moved to Kearney, Nebraska. Although Helen was a busy homemaker, she became involved in many organizations that included the Welcome Wagon, Cotilion Dance Club, Junior Women’s League, March of Dimes and numerous Bridge Clubs. She later went to work as a legal secretary and worked with many Kearney attorneys until her retirement. Helen was a very creative and talented woman who used these gifts to create many craft projects and floral arrangements for others. She also enjoyed fishing, gardening, dancing, shopping and decorating. Her greatest passion however was for her children and grandchildren. Helen was always willing to listen, encourage and share her strength and wisdom with an open heart to those she loved. Helen was a longtime member of 1st Christian Church and later Living Faith Fellowship in Kearney. Surviving relatives include her daughter, Cindy Arnold and Roger Campbell of Kearney, NE; son, Steven Arnold and Catherine of Longmont, CO; daughter in law, Laura Lee and Charles of Gering, NE; grandchildren, Tiffany, Krystal, Blake and his wife Ashley, Nicole and her husband Austin, Mayla, Eli and Nolan; great grandchildren, Conner, McKenna, Avery, Koen, Aspen and Amara; sister, Lois Matthiessen; many nieces, nephews and other extended family and friends. Helen was preceded in death by her husband, Robert; son, Craig Arnold;

Helen L. Arnold, age 84, of Kearney, passed away Tuesday, January 14, 2020 at her home. Funeral services will be on Tuesday, January 21, 2019 at 1:00 p.m. at Living Faith Fellowship Church in Kearney. Pastor Joel Stark will officiate and burial... View Obituary & Service Information

The family of Helen L. Arnold created this Life Tributes page to make it easy to share your memories.

Send flowers to the Arnold family.