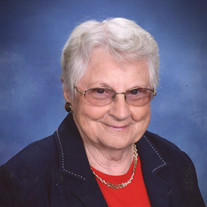 Helen M. Baker, 92, of Kearney, NE died Thursday, September 26, 2019 at Brookdale Kearney Northridge assisted living facility. Funeral services will be on Tuesday, October 1, 2019 at 11:00 a.m. at First United Methodist Church in Kearney. Pastor Kayla Mangrich will officiate, and burial will be at Kearney Cemetery. Visitation will be 1 hour prior to services on Tuesday at the church. Memorials are suggested to First United Methodist Church or to the family to be designated later. Please visit www.hlmkfuneral.com to leave a tribute or message of condolence. Horner Lieske McBride and Kuhl Funeral and Cremation Services are in charge of arrangements. Helen was born on January 7, 1927 in Miller, NE to Orson M. and Hazel A. Smith. She grew up in the Miller area and graduated from Miller High School in 1944. She then attended Kearney State Teachers College where she earned a teaching degree. Helen taught school for 7 years and later accepted a position as a Secretary at the college. She married Gordon L. Baker on September 30, 1947 in Elm Creek, NE. Gordon enlisted in the Marine Corps shortly after their wedding and the couple would reside in Cherry Point, NC while he was stationed there. After the Marines, Helen and Gordon moved to Elm Creek, NE where they owned and operated Baker’s Standard Service and Baker’s Skelly. They moved to Kearney in 1976 after Gordon took a position as Grounds Supervisor at UNK. Helen was a member of the Kearney First United Methodist Church and a past member of Women’s Church Circle. She enjoyed reading, crocheting and spending time with her family. Helen is survived by her children, Kent Baker and his fiancé Patty Zeleny of Lincoln, NE and Karen and her husband Norman Graeff of Crookston, NE; grandchildren, Tara Baker and husband Bryan Klinginsmith, Megan Baker, Keisha Andersen-Fries and husband Brett, Brady Graeff and wife Sandy, Jesse Graeff and wife Elisha and Dillon Graeff; great grandchildren, Londyn Fries, Kali Graeff, Kellen Fries, Leonardo Graeff, Aiden Graeff, Cadance Graeff, William Klinginsmith and Charlotte Klinginsmith. Helen was preceded in death by her parents; husband, Gordon.

The family of Helen M. Baker created this Life Tributes page to make it easy to share your memories.

Send flowers to the Baker family.