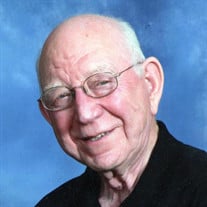 Henry E. “Hank” Schlattmann, 87, of Kearney, died July 23, 2021, at his home. Funeral services will be 10:30 am, July 28, 2021, at Holy Cross Lutheran Church in Kearney with Pastor John Rasmussen officiating. Military rites will be provided at the church by the Nebraska National Guard Funeral Honors Team. Private family burial will be later at Highland Park Cemetery in Ravenna. In lieu of flowers, memorials are suggested to the family to be designated later. Friends may watch the funeral live stream at www.holycrosskearney.org/livestream Follow the directions under the livestream toolbar in the main menu dropbox. Henry Emmit Schlattmann Jr. was born on a farm near Elm Creek, Nebraska, on September 27, 1933. He was the 10th child of 13 born to Henry Schlattmann and Bertha Patterson-Schlattmann. After two younger brothers, Jimmy and Dickie, died in childhood, “Dode” was the youngest surviving son in their loving family. His early years were spent on a dry land farm near Poole, NE where he learned to milk the cows, gather the eggs and other typical chores on a farm during the Great Depression. In 1942 the family moved to Ravenna where his father bought a tavern which was a focal point for social life for local families. In high school he played basketball and football; during his senior year he was selected as first string all conference as a 140 lbs left guard. After graduating in Spring 1952, he joined the Army in November that year. After infantry and artillery training, he was told he would be sent to Korea as part of the war effort; instead, he received orders to Germany where he was assigned to the 2nd Armored “Hell on Wheels” Division in an armored artillery unit, acting as a deterrence against Russian aggression at the beginning of the Cold War. After his discharge in Oct 1955, he returned home and soon began work at the new Rockwell manufacturing plant in Kearney. He also began dating Sandra Sue Cederquist of Ravenna, and the couple married on Oct 21, 1956. Two sons followed, Craig in 1957 and Richard in 1960. The young family was transferred to Atchison Kansas in 1964 where “Hank” and “Sandy” made a home for the next 35 years. While there he advanced professionally as a Quality Engineer and supervisor at Rockwell and later with Atchison Casting. He was deeply invested in the community through various lay leadership positions at Trinity Lutheran Church, as a volunteer coach/leader in his son’s youth sports, music and scouting activities, and as a loving father always engaged in his sons’ lives. Through the years he also remained engaged in the lives of his siblings and his many nieces and nephews, always ready to attend a graduation, a wedding or a family reunion. Hank gained a daughter when Craig married Laura Crawford, and soon became a grandfather with the arrival of Cliff in August 1981. Three younger grandchildren followed over the next 14 years including Marlena, Joshua Crawford and Paul. Shortly after their 40th wedding anniversary, “Sandy” died in 1997. Three years later, at a high school reunion, Hank was reacquainted with Norma Fiebig-Johnson, recently retired from teaching 1st grade in Cozad who had lost her husband Jim earlier. After a short courtship, Hank and Norma were married on Oct 7, 2000. With their union Hank gained additional children; son Greg Johnson and his wife Kris, and daughter Annie Johnson-Kadeva and her husband Gary. Hank and Norma became grandparents of six grandchildren including Carly Johnson-Gioia and Joseph Johnson. After living for a short time in Atchison, the newlyweds move to Kearney NE where for the past 20 years they have enjoyed some of the happiest years of their lives. Hank and Norma became great-grandparents in November 2010 and now have eight great-grandchildren. Hank was a member of Holy Cross Lutheran Church and greatly enjoyed time with dear friends competing in local senior golf tournaments or playing poker with his “poker buddies.” Hank is survived by his wife Norma; three sons and their wives, his sister Rose Moritz and her husband Paul, his brother-in-law Charles Fiebig and his wife Marilyn; six grandchildren, eight great-grandchildren and numerous nieces and nephews. He was preceded in death by his first wife Sandra; his daughter Annie and her husband Gary; brothers Bill, Bob, Dale, Harold, Gene, Jimmy and Dickie, and sisters Silva, Millie, Fern, and Maxine. “I have fought the good fight, I have finished the race, I have kept the faith”, 2 Timothy 4:7.

The family of Henry E. "Hank" Schlattmann created this Life Tributes page to make it easy to share your memories.

Send flowers to the Schlattmann family.