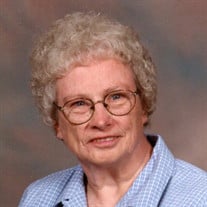 Ilene J. King, 80, of Holdrege, died March 14, 2022 at Phelps Memorial Health Center in Holdrege. Memorial services will be 10:30 a.m., Monday, March 21, 2022 at Horner Lieske McBride & Kuhl Funeral Home with Chaplain DuWane Dow officiating. Interment will follow at the Kearney Cemetery. There will be no visitation. Memorials are suggested to the Alzheimer’s Association or to your charity or church choice. Please visit www.hlmkfuneral.com to leave a tribute or message of condolence. Horner Lieske McBride & Kuhl Funeral and Cremation Services of Kearney is charge of arrangements. Ilene was born July 18, 1941 at Miller, NE to Glenn and Elsie (Gustafson) King. She was the fourth of eight children, five sisters and two brothers. As a child she also lived in the Kearney, NE area until moving with her family to Mason City, NE Basin in 1960. In 1970, she moved with her dad, mom, and sister, Peggy, back to Kearney. She was a huge comfort to her mom when Glenn passed away in 1971. After grade school, Ilene was taught by her mom, who was a former schoolteacher. She was always a great help around the house and loved when her family was around. She was further educated at South Central Mental Health in Kearney. Later, Elsie believed she needed more structure than she could give, and Ilene entered the Phelps County Mental Health System with various living situations. The best was when she lived with host families in the Holdrege area and spent time at the Corner Nugget. Sharon and Gene Posvar of Beaver City were her favorite family. When she moved to Holdrege Christian Homes in 2016, she found a new family that she loved very much. We appreciate them so much. Thank you Phelps Memorial Hospital for your great care also. Ilene is survived by sisters, Joan Meier of Kearney, Donna (Cleve) Kennedy of Mullen, NE, Sandra Behn of Hickman, NE, Audrey Taylor of Kearney, Peggy (Dennis) Triplett of Sumner, brother, Richard King of Kearney; sister in law, Susan Johnson King. She was preceded in death by her parents and a brother, Randy King.

The family of Ilene J. King created this Life Tributes page to make it easy to share your memories.