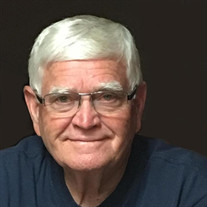 Jack D. Bridge, age 79, of Kearney, died Friday, April 24, 2020 at the Kearney Regional Medical Center. Private Family Funeral services will be on Wednesday, April 29, 2020 at Horner Lieske McBride & Kuhl Funeral and Cremation Services in Kearney with Pastor Melody Adams officiating. Visitation without family present will be on Tuesday, April 28, 2020 from 5:00 p.m. – 7:00 p.m. at the funeral home. Current Nebraska health related mandates restrict gatherings to 10 or less. Burial and graveside services will be conducted at Kearney Cemetery. In lieu of flowers, memorials are suggested to the family for designation at a later date. Cards can be sent to Horner Lieske McBride & Kuhl - 2421 Avenue A – Kearney, NE 68847. Please visit www.hlmkfuneral.com to leave a tribute or message of condolence. Arrangements are under the direction of Horner Lieske McBride and Kuhl Funeral and Cremation Services in Kearney. Jack was born on September 9, 1940 in North Loup, NE to Delbert and Reatha (Manchester) Bridge. He attended North Loup High School and graduated with the class of 1958. Jack would then attend Kearney State Teachers College where he earned a bachelor’s degree. He married Judith A. Stewart on October 17, 1964 in Ord, NE. His professional career began in 1965 with the National Bank of Commerce in Lincoln. In 1968, he moved his family to begin work for First National Bank of Kearney. After attending the Colorado School of Banking in 1976 he was invited to join the management team of the First National Bank and Trust Company of Aurora. In 1990, Jack coordinated the purchase of the Exchange Bank in Gibbon where he became the president and CEO until 1992 when he joined Kearney State Bank as Senior Vice President and Senior Loan Officer. After retiring from banking in 1996 Jack and his wife Judy started, owned and operated Auto Quest car lot until its sale in 1999. Jack and Judy then began, along with Roger Blackford the arduous task to open a Honda ATV dealership in Kearney called Heartland Motorsports in 2000. In 2008 his son Greg began work there followed by his youngest son Brett in 2010. Jack, Judy, Roger, Greg and Brett own and operated the business together until Jack's passing. Jack Bridge married his soul mate Judy Stewart in Ord, NE at the Methodist Church on October 17, 1964 after dating for about a year. After Jack finished his student teaching in Ravenna, they moved to Lincoln and had their first son, Greg, on July 25, 1966. After returning to Kearney in 1968, their second son, Brett, was born on February 21, 1971. Jack and Judy raised their family in Aurora where they stayed for 13 years. Jack and Judy enjoyed many trips over the years where they visited Hawaii, Louisiana, Colorado, and other banking conventions. After moving to Kearney and starting Auto Quest, they enjoyed many road trips to Kansas City for car auctions. After their sons graduated from Kearney State College, the boys both moved to Lincoln, NE to start their careers. Jack and Judy frequently visited Lincoln on weekends to visit their sons and grandchildren. Jack and Judy hosted many family gatherings and holidays at their home in Kearney. He was especially happy when both families relocated to Kearney to work at Heartland Motorsports with Judy and him. He enjoyed supporting his grandchildren in their varied interests, including BMX racing, cheerleading, basketball, and dance. Jack was a hot rod enthusiast who enjoyed building and working on cars. He loved traveling to car shows with his wife / co-pilot Judy across many states. Traveling with family and friends to car shows was a passion of his. Jack was blessed to have many wonderful friends. Every Friday night Jack and Judy met with their "car group" to go out for dinner and ice cream. His family looked up to him as a role model and mentor. He was a trusted advisor to his sons and grandchildren for nearly any project they were working on. Jack's contagious smile will be in the hearts of his family forever. He was a member of First United Methodist Church in Kearney, National Street Rod Association, Goodguys Rod and Custom Association, KKOA Kustom Kemps of America, and Nebraska Rod & Custom Association. Surviving relatives include his wife, Judy Bridge of Kearney; Two children and their spouses, Greg and Deb Bridge of Kearney; Brett and Jen Bridge of Kearney; Sister, Ginger Sorenson and her husband LaVern of Pasco, WA; Four grandchildren: Aaron, Emily, Noah and Maddie Bridge; Brother-in-law Jim Stewart and his wife MaryAnn, nieces and nephews. Jack was preceded in death by his parents, Delbert Bridge and Reatha (Bridge) Miller.

The family of Jack D. Bridge created this Life Tributes page to make it easy to share your memories.

Send flowers to the Bridge family.