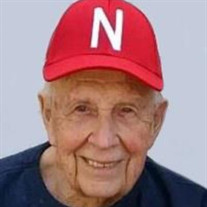 Jack W. Hurt, 93, of Kearney, died on Tuesday, October 20, 2020 at Good Samaritan Society – St. John’s in Kearney. Graveside services will be on Friday, October 30, 2020 at 11:00 a.m. at Kearney Cemetery. Pastor Alan Davis will officiate and there will be no visitation. Military honors will be provided at graveside. Memorials are suggested to the Kearney Area Animal Shelter. Online condolences may be submitted by visiting www.hlmkfuneral.com. Horner Lieske McBride & Kuhl Funeral and Cremation Services in Kearney is in charge of arrangements. Jack was born on March 22, 1927 in Kearney, NE to W. Warren and Beulah G. (Needham) Hurt. Jack attended Kearney High School and graduated with the class of 1944. Following High School, Jack served as a radio operator in the Merchant Marines. He then joined the US Coast Guard and was honorably discharged in 1947. Jack returned to Kearney and helped his father farm while attending Kearney State College. He earned his Bachelor of Arts degree in Education in 1950, and then went to work for the Union Pacific Railroad. His first teaching job was as an English teacher at Odessa High School. While there, they recruited him to be the girls’ volleyball coach in addition to his teaching duties. In 1958 he began his teaching career at his alma mater, Kearney High School. Over the years, he taught Business Law, Accounting, and Typing. He obtained his Master of Arts in Education degree in 1959 and continued teaching until his retirement from Kearney High in 1989. Throughout his teaching career, he worked summers as an inspector for DeKalb Corporation. Jack was a member of the Nebraska Education Association and the First United Methodist Church in Kearney. On June 21, 1953, he married his college sweetheart and homecoming queen, Irene Martha Siebler, in Kearney. Jack and Irene were blessed with two daughters, Jennifer and Joni. They loved being Grammy and Grampy to their three grandsons and one great-grandson. Over the years, Jack was known to walk his beloved dog Annie down the country road where they lived, stopping to talk with neighbors and friends who happened to be driving by. He loved a good story, a good cup of coffee, and treasured his days on the farm. Even as his health began to fade, he maintained his witty and well known sense of humor. Surviving relatives include his daughters, Jennifer Henricksen and husband David of Omaha, NE and Joni Fenwick and husband Mark of Kearney; grandsons, Bryan Fenwick and his wife Danielle, and Bradley Fenwick, all of Cheyenne, WY, and Warren Henricksen and his wife Alissa, and great-grandson Jack of Omaha. Jack was preceded in death by his parents, and his wife, Irene in 2017.

The family of Jack W. Hurt created this Life Tributes page to make it easy to share your memories.

Send flowers to the Hurt family.