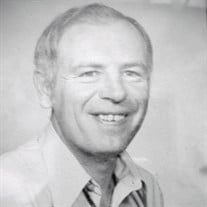 James Douglas Colling, 83, of Axtell, NE died peacefully surrounded by his family, Wednesday, June 13, 2018 at his home south of Kearney. Private Memorial Services will be held at a later date. Memorials are suggested to Assera Care Hospice. Please visit www.hlmkfuneral.com to leave a tribute or condolence. Horner Lieske McBride & Kuhl Funeral and Cremation Services in Kearney are in charge of arrangements. Jim was born April 5, 1935 in Indianola, Nebraska, to Merle William & Cecilia Theresa (Dempewolfe) Colling, He was raised and educated in McCook NE then attended McCook Jr. College, University of Nebraska Lincoln and graduated from Kearney State College with a Bachelor of Science in Education degree. Jim was also a member of The McCook Nat'l Guard. Jim met and married what was to be the love of his life, Patricia Lee Childs on December 31st, 1955 at Holy Family Church in Lincoln Nebraska. Subsequently Jim completed all the course work for his Doctorate in a combination of Physics, Chemistry & Biological Science. He was a High School Science Teacher for many years and also a member of Sigma Phi Sigma National Honorary. Jim was also a chemist at the Nat'l Research Resource Institute in Laramie WY where he taught 3 years at the University of Wyoming. He was a plant Chemist at Stauffer Chemical Co. in Green River Wyo. Jim was preceded in death by his parents Merle and Cecilia Colling of McCook NE; brother, Robert Colling of Kearney NE and two sons, Philip Merle Colling of Fairbanks Alaska and Alan Andrew Colling of Kearney NE. Jim is survived by his Wife of 62 years Pat; children, Pam (Alan) Buttram of Carl Junction MO, Rick (Terri) Colling of Laramie WY, Denise ("Tonto") Colling of Waco NE; 5 grandchildren, and 4 great grandchildren; sister, Marianne Colling of McCook NE. Also surviving, John McHugh Lakewood CO a close Cousin but more of a brother to Jim. On a more personal note. We Jim's family would like you to know a little about "Our Guy." He loved his wife, family, and mountains more than anything, His priority in life was introducing his family to the beauty of the wide open spaces of the Wind River Range, where for many years we hiked, back packed, fished, and learned survival skills that we applied in the wilderness and in our lives. Mom and Dad spent 41 of their golden years at their mountain summer home in the Winds. His final words are good words, words Jim lived by all of his life. "I went to the woods because I wished to live deliberately, to front only the essential facts of life, and see if I could not learn what to teach, and not, when I came to die, discover that I had not lived." ~Henry Thoreau Our whole Family would like to deeply express our thankfulness & appreciation for Assera Care Hospice. They are Angels of Mercy and we could not have done without their kindness and compassionate staff. We learned to love and appreciate each and every member of the Team.

The family of James Douglas Colling created this Life Tributes page to make it easy to share your memories.

Send flowers to the Colling family.