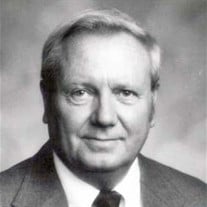 James “Jim” W. Anderson, 87, of Kearney died Wednesday, June 5, 2019 at the Kearney Regional Medical Center. Memorial services will be Monday, June 17, 2019 at 10:30 a.m. at First United Methodist Church in Kearney. Rev. Alan Davis will officiate. Burial will be at Kearney Cemetery with Military Rites provided by the Kearney American Legion Post # 52, Kearney V.F.W. Post #759 and the U.S. Navy Military Honor’s Team. Memorials are suggested to the Buffalo County Goodfellows. Online condolences may be submitted by visiting www.hlmkfuneral.com. Horner Lieske McBride & Kuhl Funeral and Cremation Services in Kearney is in charge of arrangements. Jim was born October 5, 1931 in Burwell to Guy and Mabel (Johnson) Anderson. He graduated from Ainsworth High School in 1949 then attended Kearney State College. On April 5, 1952 he married Y’londa Kenney. He was a veteran of the Korean War and served in the United States Navy from 1951 – 1954. After being discharged they lived in California. He and his wife moved to Pierre, South Dakota then moved to Kearney in 1959 and he worked at Kearney Savings and Loan. In 1966 he started Anderson Divan Cottrell Insurance Agency and worked there until retiring. Jim was elected to the Buffalo County Board of Supervisors in 1983 and served until 2001 after serving four years as Chairman. He also served on the Region III Mental Health Board as Vice Chairman for 16 years, Chairman of the Nebraska Intergovernmental Risk Management Association Board of Directors for 11 years, Chairman of the Nebraska Association of County Officials Insurance Committee. He was also a member of the State Board of Road Standards and Classifications, Vice Chairman of the Economic Development Council, Executive Committee of the American Legion, 40 year member and Delivery Chair of the Buffalo County Goodfellows, Member of the American Legion, AMVETS, 40 et 8, Kearney Eagles Lodge, Rob Morris Masonic Lodge and the Temaha Temple Shrine and the Kearney Chamber of Commerce. He was a member of First United Methodist Church in Kearney, served as a Scoutmaster, Little League Coach, Kearney Park Board Member, Cottonmill Advisory Board Chairman, 12-Year Chairman of the Kearney Crimestoppers, Buffalo County Draft Board Chairman. Member and Past Exalted Ruler of Kearney Elks Lodge #984 and past president of the Nebraska Elks Association. He also served as President of the Nebraska Association of Independent Insurance Agents, National Director of the National Association of Insurance Agents, Goodwill Industries Board of Directors, Nebraska Independent Housing Board of Directors and Youth Development Center Citizens Advisory Committee Chairman. Jim is survived by his wife Y’londa of Kearney; sons, Scott Anderson and wife Gloria and Bob Anderson both of Kearney, Joe Anderson and wife Jill of Lincoln, NE; daughter, Susan Ritchie and husband Terry of Riverdale, NE; 10 grandchildren; 8 great grandchildren and sister Pat Hoefs and husband Paul of Woodlake, NE; brother-in-law, Bill Murphy of Kansas. He was preceded in death by his sister Dorothy Murphy.

The family of James "Jim" W. Anderson created this Life Tributes page to make it easy to share your memories.