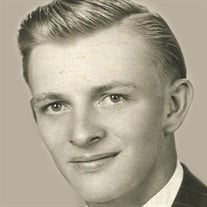 James “Jim” T. Muchmore, 91 of Springfield, MO and formerly of Kearney died Sunday, July 7, 2019 in Springfield. Services were held in Springfield, MO and further Memorial services will be Wednesday, July 17, 2019 at 2:00 p.m. at Horner Lieske McBride & Kuhl Funeral and Cremation Services in Kearney. Rev. Dean Pofahl will officiate and entombment of ashes will be at Kearney Cemetery. Military rites at the grave will be provided by the Kearney American Legion Post #52, Kearney V.F.W. Post #759 and the United States Marines Military Honors team. There will be no visitation. In lieu of flowers the family suggests contributions to the Samaritan's Purse, P.O. Box 3000, Boone, NC. 28607 or the Wounded Warrior Project, 4899 Belfort Road Suite #300, Jacksonville, FL. 32256. Online condolences may be submitted at www.hlmkfuneral.com. Horner Lieske McBride & Kuhl Funeral and Cremation Services of Kearney is in charge of arrangements. James T. (“Jim”) Muchmore was born April 20, 1928 in Axtell, Nebraska to James T. and Katie (Batteral) Muchmore. Following High School in Axtell, Nebraska, Jim served during WWII in the United States Marine Corps. On December 17, 1947, Jim and Evelyn (Yendra) were married and lived in rural Buffalo County, Nebraska where he farmed until moving to Springfield, Missouri in 1979. Jim is survived by his sister, Mary Yendra; his son, Ken and Alana Muchmore all of Kearney, Nebraska; his daughter, Linda Stubblefield of Madison, Alabama; nine grandchildren, and several great grandchildren. He was preceded in death by his parents; his wife; and his son, Steven.

The family of James "Jim" T. Muchmore created this Life Tributes page to make it easy to share your memories.

Send flowers to the Muchmore family.