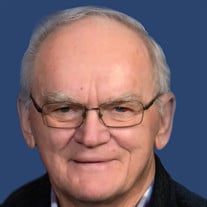 James N. “Jim” Johnson, 75, of Kearney, died Wednesday, June 19, 2019 at Kearney Regional Medical Center following a short bout with leukemia. Funeral services will be 11:00 am, June 24, 2019 at Horner Lieske McBride & Kuhl Funeral Chapel with Pastor Ken Hutson officiating. Burial will be at the Jewel Cemetery near Sumner at a later date. Visitation will be from 4:00 to 7:00 pm, June 23, 2019 and one hour prior to the service Monday at the funeral home. Memorials are suggested to McKenna’s Rae of Hope or Kearney Catholic High School Foundation. Jim was born in Boelus, Nebraska on March 3, 1944 to Ralph A. and Erna E. (Christensen) Johnson. He attended school in Cairo graduating in 1962. Jim then attended Lincoln School of Commerce earning an accounting degree and started his career at IPL in Holdrege, Nebraska. He worked at various other accounting firms in Kearney before finishing his career at Les Linder CPA office retiring in 2008. Jim married Jo Ann Rohde on August 18, 1971 in Kearney, NE. Some activities Jim enjoyed were bowling for many years, where he’s a member of the Kearney Bowling Association Hall of Fame, working at the farm, hunting and fishing, spending time traveling and visiting different wineries, and watching outdoor reality shows (Mountain Men and The Last Frontier). He greatly enjoyed his time spent at the cabin at Johnson Lake. Jim especially loved following the many activities of his grandkids including concerts, dance recitals, and many sporting events. He had an amazing ability to remember numbers and dates. Jim was also a big supporter of Kearney Catholic High School. Jim is survived by his wife, Jo of Kearney; daughter, Jackie Eickhoff and husband Brad of Columbus, NE; son, Jerred Johnson and wife Amy of Kearney; grandchildren, Erick, Ryan, and Brianna Eickhoff of Columbus, NE and Maleigha, Blayne, and Turner Johnson of Kearney; and many in-laws, nieces, and nephews. Jim was preceded in death by his parents and brother Wayne Johnson.

The family of James N. "Jim" Johnson created this Life Tributes page to make it easy to share your memories.

Send flowers to the Johnson family.