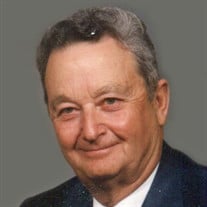 James H. Ross, age 94, of Kearney, passed away Saturday, November 2, 2019 at Country House Residence in Kearney. Funeral services will be Tuesday, November 26, 2019 at 2:00 p.m. at First United Methodist Church in Kearney. Rev. Melody Adams will officiate. Visitation is planned 1 hour prior to services at the church. Burial with military rites provided by the Kearney American Legion Post #52, Kearney V.F.W. Post #759 and the Nebraska Army National Guard Military Honors Team will be at Kearney Cemetery. Memorials are suggested to the family to be designated at a later date. Please visit www.hlmkfuneral.com to leave a tribute or message of condolence. Horner Lieske McBride & Kuhl Funeral and Cremation Services in Kearney are in charge of arrangements. James was born December 19, 1924 in Elm Creek to Henry and Julia (Anderson) Ross. He grew up in the Elm Creek area and graduated from Elm Creek High School in 1942. He was a veteran of WWII, entering the United States Army in 1943. He served in the Army Military Police Escort Guard then was discharged in March of 1946. On June 4, 1945 he married Evelyn Sear in Elm Creek. The couple lived in Elm Creek and he served as a sub rural postal carrier and clerk and then was appointed postmaster in 1957 by President Eisenhower until retiring in 1980. He and his wife moved to Kearney in 1990. He was a member of First United Methodist Church in Kearney. He served as a member of the Buffalo County Veterans Service Board for 18 years, was a member of the American Legion Post #52 in Kearney and Post #361 in Elm Creek. He was also a member of the 40 & 8 and a lifetime member of the Hospital Service League and the Buffalo County Historical Society and a member of the Nebraska Admiral Association and the Retired Postmasters Association. He received the Service to Mankind Award in 1988 and was twice honored as an Admiral in the Nebraska Navy in 1984 by Governor Bob Kearney and again in 1988 by Governor Kay Orr. Survivors in addition to his wife are nieces and nephews. He was preceded in death by his parents and one brother.

The family of James H. Ross created this Life Tributes page to make it easy to share your memories.

Send flowers to the Ross family.