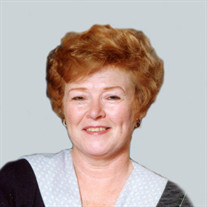 Jeanette L. Jones, 85, of Kearney, formerly Gibbon, passed away Monday, October 18, 2021, at Brookstone Gardens in Kearney. Funeral services will be on Friday, October 22, 2021 at 11:00 a.m. at Horner Lieske McBride & Kuhl Funeral Home in Kearney. Pastor Brian Gangwish will officiate and burial will be at Riverside Cemetery in Gibbon. Visitation will be on Thursday, October 21, 2021 from 5:00 p.m. – 7:00 p.m. and also 1 hour prior to services on Friday all at the funeral home. Memorials are suggested to Open Door Fellowship Church in Gibbon. Please visit www.hlmkfuneral.com to leave a tribute or message of condolence. Horner Lieske McBride & Kuhl Funeral and Cremation Services in Kearney are in charge of arrangements. Jeanette was born on October 30, 1935 in Chicago, IL to Bruce and Edna A. (Warp) Kocher. During her early childhood years, she was raised by John & Marie Petersen, who took her into their home, and loved and nurtured her as one of their own. Jeanette grew up swimming at the pool and eventually became a lifeguard when she was a teenager. She sang in the choir and participated in musicals as well as the Minden Christmas Pageant. She attended the School of the Art Institute of Chicago when she was 18, but returned to Minden, where she worked at Pioneer Village, even modeling for the first postcards for the museum in the 1950’s. She attended Minden High School and graduated with the class of 1954. She married Harold E. “Coppy” Jones on October 29, 1954 in Minden, NE, and they were blessed with 45 years of marriage. They had 5 children; Mark, Greg, Katherine, Angela, and Hal. Jeanette assisted as a farm wife and kept gardens with tomatoes and corn. She sold garden produce, as well as operated a roadside stand that served hot dogs, root beer, and ice cream. While the interstate was being built through the area in the 1960’s, Jeanette mobilized her stand via a van and served the construction workers along the way. Beginning in the 70’s, she operated Jeanette’s House of Flowers in rural Gibbon for over 25 years as a talented florist, cake decorator, and artist. She also assisted her daughter Katherine in her business venture, Annie B. Loom Works, harnessing her artistic talent to create unique handmade designs. She was a member of the Open Door Fellowship Church in Gibbon. Jeanette is survived by her son, Gregory (Elaina) Jones of Gibbon; daughter, Katherine Stalder of Gibbon; daughter, Angela (Darrel) Hauer of Greeley, CO and son, Hal (Kim) Jones of Gibbon; brother, Vernon (Inez) Schneider of Gibbon; Grandchildren Nick (Amy Luo) Jones, Annessa (Brett) Bauer, Erika (Brandon) Jessop, Aubrey Jones, MacKinzie Jones, Jori Jones, Blaine (Makayla) Jones, Nate Jones, Gabby Jones, Wyatt Jones, Avi Jones; 3 great grandchildren: Branigann Stalder, Dustin Jones, and Emberlynn Jones. She was preceded in death by her parents; Grandpa & Grandma Petersen; husband, Coppy Jones; son, Mark Jones; and sister Maxine Noltie.

The family of Jeanette L. Jones created this Life Tributes page to make it easy to share your memories.