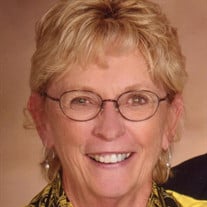 Jeanne Louise Ortgiesen, 74, of Kearney, passed away Friday, November 6, 2020 at Edgewood Vista Memory Care in Grand Island, Nebraska. Funeral services will be 10:00 a.m., Friday, November 13, 2020, at Holy Cross Lutheran Church in Kearney with Reverend Duane Duley officiating. The church requires that all attending wear a mask. For those unable to attend, the service will be live streamed at holycrosskearney.org. Burial will follow the funeral at the St. John’s Cemetery south of Wilcox, NE. Visitation will be from 5:00 p.m. to 7:00 p.m., Thursday, November 12, 2020 at Horner Lieske McBride & Kuhl Funeral Home. Memorials are suggested to the Parkinson’s Foundation. Please visit www.hlmkfuneral.com to leave a tribute or message of condolence. Horner Lieske McBride & Kuhl Funeral and Cremation Services of Kearney are in charge of arrangements. Jeanne was born June 20, 1946 in Holdrege, NE, to Bill and Louise Harms and was raised on a family farm south of Wilcox. Jeanne then went on to graduate from Wilcox High School in 1964 and later from LPN school in Kearney in 1965. During her nursing career she worked as an LPN in St. Paul, Norton, KS, Holdrege and Kearney. On September 12, 1965 she married her high school sweetheart, Eugene Ortgiesen. Jeanne had a love for God, family, and friends, as well as a talent in making every person she came into contact with feel special. Those left to cherish her memory include her husband of 55 years, Eugene Ortgiesen of Kearney; two sons, Chad (Cara) Ortgiesen and Reggie (Jennifer) Ortgiesen both of Wilcox, NE; five grandchildren, Garrett, McKenna, Claire, Dagan, and Cole Ortgiesen of Wilcox, NE; a sister, Shirley Lush of Wilcox, NE; two brothers, Bill (Jeanne) Harms of Estes Park, CO and Brent (Debbie) Harms of Wilcox, NE. She was preceded in death by her parents as well as her sister, Joanne Stratman.

The family of Jeanne L Ortgiesen created this Life Tributes page to make it easy to share your memories.

Send flowers to the Ortgiesen family.