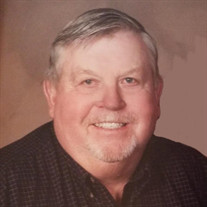 On Thursday, September 24, 2020, Jerald “Jerry” Gilbert Lierman, of Kearney, loving husband and father of one, passed away at the age of 81 at Bethany Home in Minden. Funeral services will be 10:30 a.m., Thursday, October 1, 2020, at Holy Cross Lutheran Church with Pastor Tim Barone officiating. Masks are recommended for those that will be attending the funeral. Visitation will be 5:00 p.m. to 7:00 p.m., Wednesday, September 30, 2020 at Horner Lieske McBride & Kuhl Funeral Home. Memorials are suggested to the family to be designated later. Horner Lieske McBride & Kuhl Funeral and Cremation Services in Kearney is in charge of arrangements. Jerry was born on September 23, 1939 in Norfolk, Nebraska, to Gilbert and Francis (Love) Lierman and graduated from Stanton High School in 1957, and he had the profession of golf course superintendent for 46 years, at courses like Omaha and Kearney Country Club. On November 13, 1982, he married Nancy Ann Chvala. They raised one son, Kyle Jerald Lierman. Jerry had a talent for working on machinery and landscaping. He had an impressive collection of antique cars and tractors that he acquired over his lifetime. He was known for his devotion to his faith and his kindness to others. He is survived by his wife, Nancy, his son, Kyle, his brother, Rance, his sister, Janice (Lierman) Denker and several nieces, and nephews. Jerry was preceded in death by his father, Gilbert, his mother, Francis, his sister, Shirley, his father-in-law, Robert Chvala Sr., and his mother-in-law, Doris Chvala.

The family of Jerald 'Jerry' G. Lierman created this Life Tributes page to make it easy to share your memories.

Send flowers to the Lierman family.