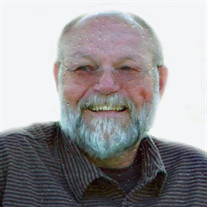 Jim L. Glenn, 68, of Kearney, entered into eternal life Sunday, October 14, 2018 at CHI Health Good Samaritan Hospital in Kearney. Funeral services will be 11:00 a.m. central standard time, October 20, 2018 at Holy Cross Lutheran Church with Pastor Duane Duley officiating. Private family burial will be at a later date. Visitation will be one hour prior to the service at the church. Memorials are suggested to Perkins County Schools Foundation or Kearney Catholic High School Foundation. Jim was born August 4, 1950 in Wray, Colorado to Cecil and Stella (Hilbert) Glenn. He graduated from Yuma High School, and then attended Drafting and Design School in Goodland, Kansas. Following School Jim moved to Denver and worked as a draftsman. Jim married Sandy Engel on April 6, 1974 at Trinity Lutheran Church near Ogallala. They moved to the family farm near Grant and Jim farmed until 1992. After farming Jim worked at Wally’s Sales and Service, then he began working at Grant Public Schools in the maintenance department. He retired as head maintenance of Perkins County Schools in 2017. Jim was a member of Trinity Lutheran Church until they moved to Meadowlark Manor in Kearney in 2017 to be near their family. Jim was a member of Holy Cross Lutheran Church. His faith was a part of every aspect of his life. Jim treasured the time he spent with his family. He especially enjoyed following his grandchildren in their various activities. He was a devoted, gentle, and kind husband, father, and grandfather. He was greatly loved, and will be dearly missed. “To God be the Glory!” Jim is survived by his wife, Sandy of Kearney; daughter, Stacey and husband Matt Manary of Kearney; grandchildren, Carsyn and Easton Manary of Kearney; sister, Lydia Fitzsimons and husband Richard of Sterling, CO; sisters-in-laws, Arlene Glenn of Yuma, CO, Becky Dahlkoetter and husband Lloyd of Grant, NE, Kathy Simpson and husband Russ of Denver, CO; brothers-in-law, Charles Engel and wife Jolene of Ogallala, NE, David Engel and wife Lisa of Grant, NE; 18 nieces and nephews, numerous great nieces, nephews, and a host of family and friends. Jim was preceded in death by his parents, two brothers, Kenny Glenn, Austin Glenn and his wife Rose Ann; sister, Ellen Woolman; special friends, Al Barnica, and Don and Cleo Watson.

The family of Jim L. Glenn created this Life Tributes page to make it easy to share your memories.

Send flowers to the Glenn family.