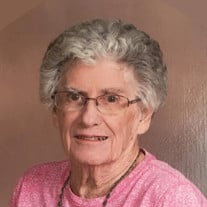 Joan E. Schmidt, 88, of Kearney, died Saturday, June 22, 2019 at Good Samaritan Society – St. Luke’s in Kearney. Funeral services will be on Friday, June 28, 2019 at 10:30 a.m. at Zion Lutheran Church in Kearney. Pastor Doug Gaunt will officiate and burial will be at Kearney Cemetery. Visitation will be on Thursday, June 27, 2019 from 6:00 p.m. – 8:00 p.m. at the funeral home and also1 hour prior to services on Friday at the church. Memorials are suggested to Zion Lutheran Church. Please visit www.hlmkfuneral.com to leave a tribute or message of condolence. Horner Lieske McBride & Kuhl Funeral and Cremation Services in Kearney are in charge of the arrangements. Joan was born on March 3, 1931 in Norfolk, NE to Percy and Margaret (Neidig) Upton. She was raised in Madison, NE except for 4 years the family spent in Page, ND. She attended grade school in District 48, 2 miles north of Madison. She later attended Page High School and finally Madison High School where she graduated in 1949. Joan was very active in 4-H while in school in Nebraska and North Dakota. She was a county award winner of 16 projects. She took part in the state style show twice and was also the North Dakota State Junior Angus Futurity Show winner. She was named the Best All-Around 4-H girl in Cass County, ND in 1947. She married Ernest Schmidt on October 25, 1949 in Madison and were married for 61 years before Ernest’s death in 2010. Joan worked as a bank teller for many years, starting in 1968, at several banks including in Tilden, NE, Columbus, NE and finally Platte Valley State Bank (now the First National Bank in Kearney) where she also served as a manager until her retirement in 1990. Joan was a member of Zion Lutheran Church in Kearney. She enjoyed fishing, camping, baking, puzzles, reading and spending time with her grandchildren. Joan is survived by her son, Richard (Beverly) Schmidt of Norfolk; daughters, Vicki Bragg of Springtown, TX and Deb (Perry) McDaniels of Kearney; nephew, Steve Upton of Germantown, MD; 7 grandchildren; 15 great grandchildren; and was to become a great-great grandmother this October; several other extended family members and friends She was preceded in death by her parents; husband, Ernest; sister, Karen Upton; son in law, Clifford K. Bragg

The family of Joan E. Schmidt created this Life Tributes page to make it easy to share your memories.

Send flowers to the Schmidt family.