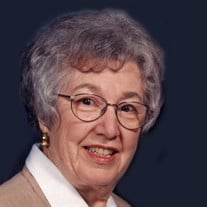 Josephine “Jo” Brooker, 99, a long-time Omaha resident and 4th grade teacher, passed away on October 24, 2018 in Kearney, Nebraska. Memorial services will be Monday, October 29, 2018 at 11:00 a.m. at the First Presbyterian Church at 216 S. 34th Street, Omaha, NE with a luncheon to follow. Private burial will precede the service at Evergreen Memorial Park Cemetery in Omaha. Rev. Dr. Jonathon Sloan will officiate. There will be no visitation, the casket will be closed. Memorials may be sent to: Good Samaritan Society - St. Luke’s, 2201 East 32nd Street, Kearney, Nebraska 68845 or First Presbyterian Church, 216 South 34th Street, Omaha, Nebraska 68131. She was affectionately called “Joey” by Herman “Brook” Brooker, her husband of 56 years, and was the mother of two sons, James and Douglas. Jo was born in Columbus, Ohio, on September 5, 1919, to parents John Chamberlin and Ada Maurer Chamberlin. When she was 5, her father passed away and the family moved to Omaha, Nebraska. When she was 16, her mother died and the five siblings closed ranks. Oldest sister – Virginia and husband John – raised Jo, while second oldest sister – Vera and husband George – raised younger brothers Jim and John. Jo graduated from Omaha North High School, attended the University of Nebraska Lincoln and graduated from the University of Nebraska Omaha. During college summer employment at Wright and Wilhelmy in Omaha, she met and began dating Herman Brooker. Their relationship became long-distance during World War II, as Jo was employed in Washington, DC at the Quartermaster’s Office in the Pentagon and “Brook” was an Air Force officer, stationed in Chandler, Arizona. A marriage proposal, caused Jo to ride a troop train cross-country, where she was married on November 28, 1942, in a small chapel on Williams Air Field. Following the War, they relocated to Omaha, where Jo completed college and began a 25+ year career as a 4th grade teacher at Walnut Hill and Crestridge schools. Jo was a 65-year member of First Presbyterian Church in Omaha, where she was an Elder, Stephen’s Minister, Sunday school teacher and member of numerous Circles and activity groups. She was a proud member of PEO and a volunteer at the Omaha Western Heritage, where she re-enacted, in costume, classroom life from the 1880’s for student visitors. She enjoyed her houseplants, dancing, playing the organ and traveling, particularly to the New England states during the fall and to Europe. Jo and Brook made several long-time friends on cruises to Alaska and beyond. They enjoyed a wonderful circle of life-long friends who loved local theater, Omaha Pops productions and Peony Park dancing. Known as the “Playhouse Gang” the group celebrated holidays, special events and 50th wedding anniversaries together. Her “Chamberlin clan” of siblings and their extended families remains close, and since 1949 have regularly celebrated festive Family Reunions every three years at scenic U.S. locations. Jo was the Chamberlin’s family historian and cartoonist. Jo always had a positive word for everyone and was an organized, cheerful and a caring and loving wife and mother. She is preceded in death by husband, Herman, sisters Virginia and Vera, brothers Jim and John. She is survived by sons, James (Julia), Douglas (Constance); grandsons and great grandchildren Aaron (Laura), Elias, Jonas and Ari and Jacob (Lindsey), William, Josephine and Franklin.

The family of Josephine C. Brooker created this Life Tributes page to make it easy to share your memories.

Send flowers to the Brooker family.