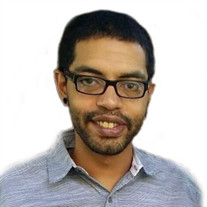 Joshua C. Salyer, 29, of Kearney, formerly McCook, died Friday, March 22, 2019 at his home in Kearney. Memorial services will be on Wednesday, March 27, 2019 at 1:30 p.m. at Horner Lieske McBride & Kuhl Funeral and Cremation Services in Kearney. Rev. Bruce Lester will officiate and burial will be at Kearney Cemetery. There will be no visitation. Memorials are suggested to the family to create an educational fund for Joshua’s children. Online condolences may be submitted at www.hlmkfuneral.com. Arrangements are under the direction of Horner Lieske McBride & Kuhl Funeral and Cremation Services in Kearney. Josh was born on July 23, 1989 in McCook, NE. and went directly home from the hospital to live with his adoptive parents, Lynn E. and Karen S. (Short) Salyer. He attended the Evangelical Free Church with his family where he was active in AWANA and Outlet. Josh became interested in the guitar and was an excellent musician. He attended McCook High School and graduated with the class of 2008. He moved to St. Louis, MO and graduated from L’Ecole Culinary Institute in 2010. Joshua worked in St. Louis at an underground restaurant known as Entre’. He returned to McCook in the summer of 2011 when his daughter Laila Adelle was born. He married Kellanie Pinkal on April 14, 2012. While in McCook Josh was a chef at the Coppermill and Loop Brewing Company. Wanting to further his culinary skills, Josh and family moved to Omaha where he became a very successful sous chef at Brushi. It was during that time his son Ronan Elijah was added to the family. Realizing that restaurant hours were not conducive to family life, Josh attended Omaha Coding School and became a successful coder, working for Race Note and later for Sandhills Publishing. Esmae Luelle was born in January of 2018. In June of 2018, Josh moved to Kearney to help his parents resettle after his father’s retirement. Josh enjoyed fishing, camping, hunting, movies, all genres of music, shooting pool, unique culinary arts, writing code for useful computer applications and bacon! Surviving relatives include his wife, Kellanie Salyer and children, Laila, Ronan and Esmae Salyer all of McCook, NE; parents, Lynn and Karen Salyer of Kearney; brothers, David Salyer of Kearney and Justin Salyer of Central City; sister, Moriah (Colter) Bartram of Lincoln; aunt, Donna Short of Kearney; numerous other extended family members and friends. Josh was preceded in death by his grandparents Wayne and Evelyn Salyer, and James and Alma Mae Short of McCook, and sister in law, Dawn Salyer of Kearney.

The family of Joshua C. Salyer created this Life Tributes page to make it easy to share your memories.

Send flowers to the Salyer family.