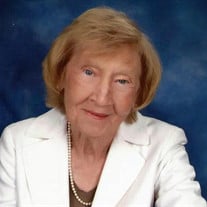 Joyce Brennan, 91, of Kearney died Sunday, April 1, 2018 at her daughter’s home in South Bend, NE. Funeral Services will be Friday, April 6, 2018 at 2:00 p.m. at First United Methodist Church in Kearney. Rev. Alan Davis will officiate assisted by Father Joe Hannappel. Burial will be at Kearney Cemetery. Visitation will be held Thursday April 5 from 5:00 to 7:00 p.m. at Horner Lieske McBride & Kuhl Funeral Home and prior to the funeral services at the church. Memorials may be made to First United Methodist Church or to the Kearney Goodfellows. Please visit www.hlmkfuneral.com to leave a message of condolence. Joyce was born July 30, 1926 in Grand Island, NE, to Ralph and Minnie (Harvey) Drown. She attended grade school in Poole, NE, until third grade when her family moved to Gibbon, NE. She graduated from Gibbon High School in 1943. On Jan. 18, 1950 she married Leo Brennan in Kearney. She worked at the Kearney Air Force Base and Sears until retiring to raise her family. She later worked for Valley Vending implementing their vending program at Rockwell International in Kearney. In later years, Joyce enjoyed a career with Gregerson and Sheppard Jewelry in Kearney. Prior to marriage and until 2016 she sold Sallye Harmer cosmetics traveling Nebraska and becoming director for the state. She was a member of First United Methodist Church of Kearney, Kearney V.F.W and American Legion Auxiliaries, Evening Belles Extension Club, B. P. O. Does, and the Red Hat Society. She enjoyed organizing reunions for Sears and helping her husband organize reunions with Midwest Building Movers Association. Most of all, Joyce cherished time spent with her family. Surviving relatives include; sons, Tom Brennan and wife Roxan of Marian, Iowa, Bill Brennan and wife Cheryl of Kearney; daughter, Mary Jo Hill and husband Bruce of South Bend, NE. Joyce is also survived by her grandchildren; Todd Brennan and wife Megan of Omaha, NE, Andrea Young and husband Matt of Leawood, KS, Stephanie Brennan and Fiancée Mike Mattingly of Olathe, KS, Kyle Brennan and wife Sarah of Kearney, Kory Brennan and wife Crissy of Kearney, Brennan Hill of Lincoln and ten great- grandchildren. She was preceded in death by her parents and later by her husband in 1999.

The family of Joyce Brennan created this Life Tributes page to make it easy to share your memories.

Send flowers to the Brennan family.