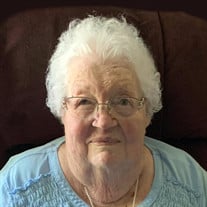 Joyce C. Kieborz, 90 of Kearney, formerly Litchfield, NE, died on Friday, February 4, 2022 at Good Samaritan Society – St. John’s in Kearney. Private family funeral services will be held at a later date followed by burial in the Litchfield Cemetery. Public visitation will be on Monday, February 7, 2022 from 5:00 p.m. – 7:00 p.m. at Horner Lieske McBride & Kuhl Funeral Home in Kearney. Memorials may be directed to the Litchfield Fire Department and EMT’s. Please visit www.hlmkfuneral.com to leave a tribute or message of condolence. Horner Lieske McBride & Kuhl Funeral and Cremation Services in Kearney is in charge of arrangements. Joyce was born on June 21, 1931 in Palisade, NE to George and Carrie (Schreffler) Grove. She attended Palisade High School and graduated with the class of 1949. She married Bernard Kieborz on January 14, 1951 in Broken Bow, NE. Joyce worked as the Post Master in Litchfield for over 30 years. She was a past member of Faith Lutheran Church in Hazzard. She was also a member of the Legion Auxiliary, Retired Post Masters, Library Board and also a past member of the Litchfield Fire Department and EMT’s. Joyce enjoyed playing cards, quilting and the company of her grandchildren and great grandchildren. Prior to her stay at St. John’s, she was a resident at WelCove Assisted Living in Kearney for over 3 years. Surviving relatives include her children, Bob Kieborz and his wife Rochelle of Doniphan, Cindy Wardyn and Dave of Litchfield and Bernadette Goodner and her husband Jim of Litchfield; siblings, Betty Ann Ellis of Falls Church, VA, Ed Spencer and his wife Janet of Mason City, NE, Diana Mohr of Marquette, NE and Jim Spencer and his wife Le of Kearney; 8 grandchildren; 15 great grandchildren; numerous other extended family and friends. Joyce was preceded in death by her parents; step-father, Jim Spencer; husband, Bernard; son in law, Ken Wardyn; sisters, Lucille Grove and Patty Barber and her husband Rudy.

The family of Joyce C. Kieborz created this Life Tributes page to make it easy to share your memories.

Send flowers to the Kieborz family.