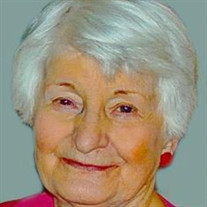 June Iris Hand, age 89, of Pleasanton, passed away Friday, April 17, 2020, at her home in Pleasanton with her family by her side. Private family graveside services will be at the Pleasanton Cemetery with Pastor Dean Hanson officiating. Visitation without the family present will be from 5:00 p.m. to 7:00 p.m., Monday, April 20th, 2020 at Horner Lieske McBride & Kuhl Funeral Home. We ask that people comply with the CDC and State of Nebraska’s suggestions of limiting the size of gatherings. Memorials may be made to the Grace Lutheran Church or the Pleasanton Volunteer Fire Department. Please visit www.hlmkfuneral.com to leave a tribute or message of condolence. Horner Lieske McBride & Kuhl Funeral and Cremations Services are in charge of arrangements. June I. Pritchard was born April 2, 1931 to Robert and Helen Jones Pritchard at their farm home in Pleasant Valley. She was the oldest of seven children: June, Delda, Carolyn, Corene, Bob, Corliss and Brian. June spent her childhood helping with all the farm chores and caring for her younger siblings. She was baptized on May 28, 1939 and confirmed on June 17, 1945 in the Calvary Lutheran Church in Pleasant Valley. She attended Pleasant Valley District #57 through the eighth grade and was graduated from Pleasanton High School with the class of 1948. June always helped her Dad with field work and putting up hay with the help of her sisters and best friend Darlene Hoffman. She also checked cattle in the far pasture on her horse, Reba. June and Norman Hand, son of Raymond and Julia Klein Hand, were married November 3, 1949 and started married life on the "Halpin Farm" later known as "Honeymoon Hill." Their children Bobby Ray and Sherry Lynn were born while on the farm. In 1956 the family moved to Pleasanton where Renee' Denise and Jon Michael joined the family. June and Norman, along with their friends Duane and Adaline Geisler, bought and operated Capp's Cafe for a couple years. For many years she served as "flagwoman" for their crop spraying business, Hand Flying Service. June later was a school cook, became a Licensed Practical Nurse in 1974, and did the bookkeeping at Hand Machining, along with farming the "Halpin Farm." One of June's projects was to research both the Pritchard and Hand families' genealogy. Because of this research June had the great vision that the Pleasanton community should have its history published so that the coming generations would appreciate the sacrifices made by all who had passed this way. This was the start of the "Pleasanton on the Loup" historical book. June worked on this book along with many other dedicated volunteers. June remarked that she had played softball for twenty-five years as mainly the catcher. She also played women's golf and couple's golf at Prairie Hills. In later years she used her golf cart to maintain her bluebird houses. June was always involved with community service and activities including Fort Kearney Genealogical Society, Buffalo County Historical Society, Daughters of the American Revolution, General Society of Mayflower Descendants, Pleasanton Cemetery Board, Ravenna Annevar Quilt Guild, Kearney Quilt Guild, Pleasanton Red Hat Society, Pleasanton Volunteer Fire Department (started EMT's in a '57 station wagon and later helped staff the ambulance), Grace Lutheran Church Altar Guild and Kingdom Workers, and Bluebird Society. Her hobbies included farming, gardening, hunting, waterskiing, softball, golf, and babysitting "her babies". June received several awards and recognition including the Ak-Sar-Ben Good Neighbor award and the Pleasanton Volunteer Fire Department Cornerstone award. As demonstrated by the above activities and awards it is evident that she was person of wisdom and warmth plus being generous and giving. Her positive outlook on life was to be admired. Survivors include her husband Norman Ray of 70 years of Pleasanton; sons, Bobby Ray (Leatta) Hand and Jon (Diane) Hand from Pleasanton; daughter, Sherry (Richard) Fisher of Scottsbluff; grandchildren, Chevy Fisher, and James (Candace) Fisher of Scottsbluff; Ricky (Becca) Fisher of Cheyenne, WY; Amber (Travis) Richard of Pleasanton; JenaRae (Eric) Vieth of Aurora; Dalton Hand and his fiancé Jessica of Kearney; Adeline Hand and her fiancé Adam, and Conner Hand of Pleasanton; eleven great grandchildren (June loved to be called "GG"); sisters, Delda Klein Johnson, Corene (Errol) Phillips, Corliss (Phil) Dixon and sister-in-law Iva Pritchard all of Pleasanton; brother Brian (Hope) Pritchard of Pleasanton; brother-in-law Rex Hand of Kearney as well as many nieces, nephews, extended family and friends. She was preceded in death by her parents and her husband's parents, daughter Renee' (1978), sister Carolyn (1941), brother Bob (2019), brother-in-law Donald Klein (1973) and sister-in-law Betty Hand (2018).

June Iris Hand, age 89, of Pleasanton, passed away Friday, April 17, 2020, at her home in Pleasanton with her family by her side. Private family graveside services will be at the Pleasanton Cemetery with Pastor Dean Hanson officiating. Visitation... View Obituary & Service Information

The family of June I. Hand created this Life Tributes page to make it easy to share your memories.

Send flowers to the Hand family.