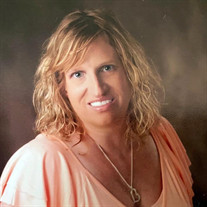 Kara (Heacock) Seachord, age 45, of Kearney, died April 8, 2021 at Good Samaritan Society – St John’s in Kearney. Memorial services will be held on Monday, April 19, 2021 at 10:30 a.m. at the Kearney E-Free Church with Pastor Brian Klein officiating. Burial will follow at the Kearney Cemetery. Memorials are suggested to UNMC and Children’s Hospital in Omaha. Please visit www.hlmkfuneral.com to leave a tribute or message of condolence. Horner Lieske McBride & Kuhl and Cremation Services are in charge of arrangements. Kara was born on August 19, 1975 in Hastings, Nebraska to Ronald G. and Jannis K. (Mohr) Heacock. She attended Kearney High School and graduated with the class of 1994. She attended E-Free Church and Awana. She spent her summers at Timberlake Ranch Camp as a camper and volunteer working with horses. After graduation she worked at Sonshine World Daycare (New Life Assembly Church), Good Samaritan Daycare and held an in-home daycare. She was united in marriage to Stephen A. Seachord on June 25, 2005 in Kearney. She enjoyed spending time with family and friends. They loved to camp, as well as enjoyed cheering on their kids during school activities. Her laughter was contagious. She was a witness of her faith in God to those who cared for her during and after her numerous surgeries and hospitalizations. Kara is survived by her husband Stephen Seachord of Kearney; children, Corbin (Fiancée Annalise), Harlie and Wyatt; mother, Jannis Heacock of Kearney; brother, Brandon (Laura) Heacock and their children, Catalina and Elijah all of Lincoln; mother-in-law, Doris Seachord of Waterloo, Illinois; father-in-law, Ike Seachord of Prosser; brother-in-law, Mike (Lisa) Seachord and their daughter, Reagan all of Springfield, Missouri. Kara was preceded in death by her father, Ronald Heacock; grandparents, Alta (Stanley) Larsen of Roseland; Doris (Robert) Sahling of Kearney; and Uncle Randy Mohr of Holstein.

The family of Kara S. Seachord created this Life Tributes page to make it easy to share your memories.

Send flowers to the Seachord family.