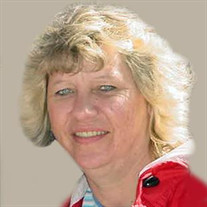 Karen K. Peterson, 57, of Kearney, died Friday, July 19, 2019 at her home after a nearly a two year battle with cancer. Memorial services will be 10:00 a.m., July 27, 2019, at Horner Lieske McBride & Kuhl Funeral and Cremation funeral chapel with Michael Freitag officiating. Burial will follow the service at Lone Tree Cemetery near Weissert, Nebraska. Memorials are suggested to AseraCare Hospice in Kearney. Karen was born April 22, 1962 in Scottsbluff, Nebraska to Clarence and Laura (McDaniel) Kitt. She attended school in Bayard and Minatare graduating in in 1980. She was very athletic and holds the state record in 440-yard dash. She resided in Minatare and Bayard until moving to Kearney in 1993. She met her soulmate Jody Peterson in 1995. They were married on her birthday in 2005. She worked at Ace Irrigation as an injection molder for over 15 years. She has a love for cooking, cleaning, and taking care of her animals. Karen loved her nieces and nephews, who she was like a second mother to. She and Jody bought a home together in Kearney that she loved. Karen loved ladybugs and enjoyed collecting them. Karen knew how to make people feel good about themselves. Karen is survived by her husband, Jody Peterson of Kearney; sisters, Inga Kitt of Burwell, NE, Kathy Kitt of Kearney, brother, Ron Kitt and wife Linda of Kearney; brothers-in-law, Greg Peterson, Troy Peterson, Jeff Peterson and his wife Jeri of Kearney, NE; nieces, Jordan Kitt, Cara Kitt of Omaha, NE, Erin Kitt, Shelby Peterson of Kearney, NE, Ariah Peterson of San Diego, CA, Mranda Peterson of Kearney, NE; nephews, Keenan Kitt of Kearney, Sean Krull of Geneseo, IL, Cory Kitt of Kearney, Greg Kitt of Litchfield, NE, Mike Peterson and wife Amy, Nathen Peterson, and Hayden Peterson of Kearney, NE; and numerous cousins. Karen was preceded in death by her parents and grandparents George and Ruth McDaniel.

The family of Karen K. Peterson created this Life Tributes page to make it easy to share your memories.

Send flowers to the Peterson family.