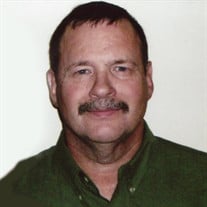 Keith J. Ziems, 66, of Kearney, passed away on Thursday, September 24, 2020 at Kearney Regional Medical Center. Funeral Services will be on Friday, October 9, 2020 at 10:30 a.m. at New Life Church in Kearney. Pastor Dean Buse will officiate and burial will be at Prairie Home Cemetery in Holdrege. Visitation will be on Thursday, October 8, 2020 from 5:00 p.m. to 7:00 p.m. at Horner Lieske McBride & Kuhl Funeral Home. The family requests that masks are worn at both the funeral and visitation. Memorials are suggested to the family, to be designated later. Please visit www.hlmkfuneral.com to leave a tribute or message of condolence. Horner Lieske McBride & Kuhl Funeral and Cremation Services in Kearney is in charge of arrangements. Keith was born on December 15, 1953 in McCook, NE to Albert and Esther (Nusbaum) Ziems. He attended Holdrege High School and graduated with the class of 1973. He attended Hastings Tech after high school. He married Polly Bourelle on January 19, 1974 in Holdrege. This union was blessed with two children: Brian and Shelly. The Couple made their first home in Axtell. Keith moved his family to Kearney in 1979. Keith was a dedicated and hard worker, in 1973 Keith started work at Rockwell in Kearney and worked there until the plant closed. Keith went on to work at L&W Tire Retread in Kearney, Marshall Engines in Kearney, Hornady Manufacturing in Grand Island, Eaton in Kearney, and most recently being employed at Parker-Hannifin in Kearney. He was a member of New Life Church in Kearney. Keith enjoyed riding his motorcycles, hunting and shooting his guns, but most of all he enjoyed spending time with his family and grandchildren. Surviving relatives include his wife, Polly of Kearney; son, Brian of Kearney; daughter, Shelly and husband Trenton Temme of Kearney; grandchildren, Kegan, Jacob, Ashton, and Gage Temme all of Kearney; brother, Gary and wife Sue Ziems of Minden; brother, Steve and wife Marlene Ziems of Hazard; brother in law, Richard and wife Paula Bourelle of Holdrege; sister in law, Sharon Bourelle of Stromsburg; sister in law, Betty and Husband Louis Winkelmann of Holdrege. Keith was preceded in death by his father, Albert Ziems; mother and step father, Esther and Robert Lloyd; sister, Sheryl and husband Randy Porter; father and mother in law, Harold and LaRena Bourelle, brother in law, Larry Bourelle.

The family of Keith J. Ziems created this Life Tributes page to make it easy to share your memories.

Keith J. Ziems, 66, of Kearney, passed away on Thursday, September...

Send flowers to the Ziems family.