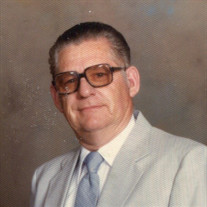 Kenneth H. Curren, 98, of Kearney, passed away November 6, 2019 at his home. Funeral services will be 11:00 a.m., November 12, 2019 at Horner Lieske McBride and Kuhl Funeral Chapel with Rev. Alan Davis officiating. Burial will be 2:30 pm, at the Arborville Cemetery with military rites. Visitation will be from 9:30 a.m. until service time Tuesday at the funeral home. Memorials are suggested to the family to be designated later. Kenneth H. Curren was born September 12, 1921 to Harvey E. Curren and Frances M. (Conrad) Curren at Polk, NE. He grew up on a farm in York County. He was baptized in the Congregational Church as a child. He married Lucile E. (Elaine) Kamper of Central City, NE on April 23, 1942. Two children were born of this union; a son, Merlyn, deceased at age 12 years, and a daughter, Linda (Fuehrer) of Kearney. He was inducted into the U. S. Army on June 4, 1942, where he served for four years, two of which were overseas. He was a Medical Technician with the 29th General Hospital which took him to the Asiatic-Pacific front...New Caledonia, Guadalcanal, Fiji Islands, Okinawa and Korea. He was honorably discharged on December 13, 1945. Upon returning home to Central City, NE, he completed an electrician’s course and worked for Central City Light and Power Company as an electrician lineman. In May of 1948, he began working for Kansas-Nebraska Natural Gas Company, Inc. where he was a serviceman for three years. He was later transferred to Fullerton as a service foreman and later promoted to District Manager there. He served as District Manager in Fullerton, O’Neill, Chadron, Julesburg, CO and came to Minden in October 1970. He retired in Minden on October 1, 1984. Part of Ken’s job included being involved in the community, which he thoroughly enjoyed! He had the innate ability to hold a position of leadership as well as to be a valued team player, happy to help in whatever capacity needed. While living in Fullerton, he coached American Legion baseball, was President of the fire department as well as President of the Eagles lodge. In O’Neill, he was President of the Chamber of Commerce, Lion’s Club charter member and President and Chairman of the Boy Scouts fund drive. He was a member of the Rotary Club, American Legion and VFW in both Chadron and Minden. He was a long-standing member of the United Methodist Church. During his retirement, he enjoyed going to coffee every day to visit with his friends. Adults and children alike loved Ken because of his marvelous way with people. He could put anyone at ease with a conversation and a smile. Ken loved to tease and had a great sense of humor...he was especially drawn to people who were also of that mindset. He loved music, singing, playing piano and guitar throughout his entire life. His children grew up in a household filled with music and happiness. He and his wife Elaine hosted various Christmas parties in the neighborhood in Minden and enjoyed a rewarding social life with their neighbors and friends. He was an ardent fan of the Nebraska Cornhuskers and enjoyed watching other sports like volleyball and baseball. Ken was a devoted husband, loving father and wonderful grandfather. He made everyone feel very welcome. He will be missed by everyone whose lives he has touched. Ken is survived by his wife, Elaine, of Kearney, daughter Linda Fuehrer of Kearney, granddaughter Sasha Elizabeth Conrad of Kearney, special cousins Jerry and Lori King along with many nieces, nephews and friends. Ken was preceded in death by three brothers and three sisters.

The family of Kenneth H. Curren created this Life Tributes page to make it easy to share your memories.

Send flowers to the Curren family.