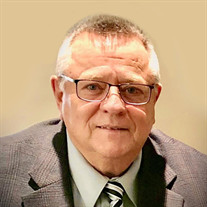 Kenneth “Ken” S. Banks, 70, of Kearney, passed away Wednesday, January 20, 2021. A memorial service will be held on Friday, February 5, 2021 at 11:00 a.m. at Horner Lieske McBride & Kuhl Funeral and Cremation Services in Kearney, with a reception to follow at Buffalo County Extension Building. In lieu of flowers, the family directs memorials to Yanney Heritage Park in Kearney, where he loved to take his grandchildren fishing. Please visit www.hlmkfuneral.com to leave a tribute or message of condolence. Horner Lieske McBride & Kuhl Funeral and Cremation Services in Kearney is in charge of arrangements. Kenneth Steven Banks, beloved husband, father and grandfather, passed away unexpectedly of natural causes in his home in Kearney, Nebraska January 20, 2021. He was born in Cherokee, Iowa on July 21, 1950 to Fred Hugh Banks and Jacquelyn (Steinert) Banks. Growing up in Spearman, TX he was the oldest of three boys. He attended Clarendon Junior College in Clarendon, Texas and ultimately graduated from the University of Nebraska- Lincoln with degrees in Agriculture and Entomology. Ken later met Connie O’Meara and they were married in Kearney, NE on June 25, 1976. They went on to have two sons, Brian Kenneth Banks and Adam Patrick Banks. He had a long and successful career as a professional in the agricultural industry. He had a passion for hunting, fishing, shooting, the outdoors, and most recently, his grandchildren. He is survived by his wife Connie; his children Brian (Christie) and Adam (Karrie); his grandchildren Madilyn, Bridger, Sloane, Harper and Meara; his mother Jacquelyn and his brothers Mike (Dawn) and Greg.

The family of Kenneth "Ken" S. Banks created this Life Tributes page to make it easy to share your memories.

Send flowers to the Banks family.