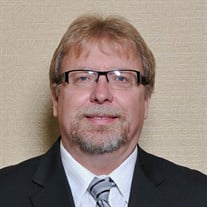 Larry Eugene Hidy, age 60, of Kearney, passed away June 3, 2020, at his home. Memorial services will be held 10:30 a.m., Monday June 8, 2020 at Holy Cross Lutheran Church with Pastor Tim Barone officiating and private family inurnment following at the Kearney Cemetery. Friends may watch the memorial service live steam at www.holycrosskearney.org. Follow the directions under the livestream toolbar in the main menu dropbox. There will be no visitation. In occordance with with CDC guidelines for social distancing, Holy Cross Lutheran Church is asking anyone planning on physically attending Monday’s memorial service to register at www.signupgenius.com/go/4090E45A9AD2AAAF94-larry. or call the church office at 308-237-2944. Memorials are suggested to the family to be designated later. On September 27, 1959 in Kearney, Nebraska, our lovingly heavenly Father gave Larry Eugene Hidy his first breath of life and placed him into the loving care of his parents, John and Gracie (Stithem) Hidy. Larry graduated from Kearney High School in 1978 and attended two years at Kearney State College. Larry was united in marriage to Pamela Pittenger Hilker on December 31, 1987. One son was blessed to this marriage, Joshua Jon Hidy. On July 24, 1988 through the power of water and word in Holy Baptism, the Holy Spirit created faith in Larry’s heart and made him a child of God and a member of God’s Kingdom of Grace. Larry’s son Joshua Jon was Baptized with Larry on that same day. Larry requested his Baptism was on the same day as Joshua’s. On April 22, 1990 at Trinity Lutheran Church in Lexington, Nebraska, Larry publicly professed his faith and confirmed the promises made for him at his Baptism. He was a former member of Trinity Lutheran Church and a current member of Holy Cross Lutheran Church in Kearney. God blessed Larry with 40 years of experience in the Glass Business, and Tri-County Glass, Inc. was opened 11 years ago. Larry was a member of Leadership Kearney Class of 2013 and an active member of Kearney Dawn Rotary for the last 10 years. Larry enjoyed golfing, wood working, and carpentry, but the love of his life was spending time with family. Larry knew that Jesus Christ was his Lord and Savior, and that by faith in Jesus all of his sins were forgiven and there was a place prepared for him in Heaven. And so, on June 3, 2020, at the age of 60 years, our loving, heavenly Father sent His Holy Angels to carry Larry into the joy and bliss that was waiting for him. Larry is survived by his wife, Pamela Hidy of Kearney; son, Joshua (Suzuka Shimada) Hidy of Kearney; two granddaughters, Miley Marie and Mia Rose Hidy; two sisters Eva (Dwayne) Nickel-Drabek of Kearney and Shelly (Roger) Doud of Kearney; brother Bob (Diane) Hidy of Loveland, CO.; mother-in-law, Barbara Stevenson; and a sister-law, Brenda Sonksen; 18 nieces and nephews; 31 great nieces and nephews as well as extended family and friends. Larry was preceded in death by his parents; a brother, Bill Hidy; a sister, Verena Wetter; father-in-law, Gordon Pittenger; stepfather-in-law, Lewie Stevenson; sister-in-law, Debra Ann Branstiter; brothers-in-law, Butch Nickel and Ray Wetter; nephews, Bo Stevenson and Nathan Mandelko; and his niece, Hilary Ann Branstiter.

The family of Larry E Hidy created this Life Tributes page to make it easy to share your memories.

Send flowers to the Hidy family.