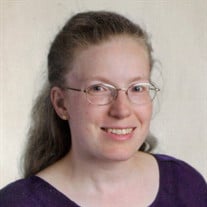 Laura Christine Pierce, age 41, of Kearney, entered her eternal home in heaven on August 11, 2019, at Kearney Regional Medical Center after a courageous fight with cancer. Funeral services will be 11:00 a.m., (CDT), Thursday, August 15, 2019, at Holy Cross Lutheran Church in Kearney with Pastor Duane Duley officiating. Visitation will be 5:00 p.m. to 7:00 p.m., (CDT), Wednesday, August 14, 2019, at Horner Lieske McBride & Kuhl Funeral Home in Kearney. On Friday, August 16, 2019, there will be visitation at Saint John’s Lutheran Church, (four miles South, and one mile West of Roscoe, NE.) starting at 10:00 a.m., (MDT). A brief service with burial following at the Saint John’s Lutheran Cemetery will begin at 11:00 a.m., (MDT). Memorials are suggested to Mission Central in Mapleton, Iowa and online condolences may be made at www.hlmkfuneral.com. Horner Lieske McBride & Kuhl Funeral and Cremation Services in Kearney is in charge of arrangements. Laura was born on June 16, 1978 in Schuyler, NE., to Robert and Bonita (Beck) Pierce. She attended school at Centennial High School in Utica, Hastings College and Central Community College in Hastings. Laura enjoyed using her musical talents as accompanist of Kearney High School Choirs. She also played the organ, piano, flute, and handbells at Holy Cross Lutheran Church in Kearney. She was an active member of the Lutheran Women’s Missionary League. Survivors include her parents, Pastor Robert and Bonita Pierce of Ogallala; two sisters, Michelle Degenhardt of Tomball, TX. and Kristina Pierce of Missouri City, TX; and a niece and nephew, Ashlyn and Caleb Degenhardt both of Tomball, TX. She was preceded in death by her grandparents and her brother-in-law, Ryon Degenhardt.

The family of Laura C. Pierce created this Life Tributes page to make it easy to share your memories.

Send flowers to the Pierce family.