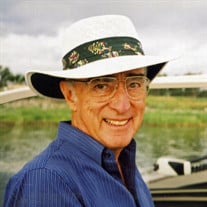 Leo L. Henricksen, 93, of Kearney, passed away Friday, September 20, 2019 at the Good Samaritan Society in Alma. Funeral services will be Thursday, September, 26, 2019 at 10:30 a.m. at First United Methodist in Kearney. Rev. Melody Adams will officiate. Burial will be at Kearney Cemetery with military rites provided by the Kearney V.F.W. Post #759, Kearney American Legion Post #52 and the U. S. Navy Military Honors Team. There will be no visitation, the casket will be closed. Memorials are suggested to the Peterson Senior Activity Center in Kearney. Please visit www.hlmkfuneral.com to leave a tribute or condolence. Horner Lieske McBride & Kuhl Funeral and Cremation Services in Kearney is in charge of arrangements. Leo Henricksen was born November 26, 1925 to Henry and Mary Henricksen on a farm near St. Edward, Nebraska. He was the youngest of nine children. Growing up on the farm he attended a one room school house in Rosenberg and worked in the family’s farm and general store. He enlisted in the U. S. Navy on his 18th birthday and served on board the USS Oxford in the Pacific until 1946, through the end of World War II. He participated in the assault on Okinawa, part of the greatest generation. Upon returning from the war he married his sweetheart, Opal Cuddeford. They moved to Kearney where they had two sons, David and Dana. He worked for his brother-in-law until joining First National Bank (now Wells Fargo). During his 33 years at First National Bank he helped countless individuals and businesses achieve their dreams and made many friends. During his over 70 years in Kearney, Leo served on numerous boards of businesses and charitable organizations contributing to the Kearney community. Upon retirement he and Opal spent several years traveling, spending winters in Arizona and developing many more friendships. After almost 50 years of marriage, Opal passed in 1995. A few years later he met and married his second love, Jeanene Swartz. Spending winters in Arizona, golf and frequent visits to the Peterson Senior Activity Center they enjoyed almost 18 years together. He is survived by his wife Jeanene; children, David Henricksen (Jennifer), Dana Henricksen (Cheryl), Mary Jo Christensen (Greg) and Tomas Schwartz. Grandchildren, Amber McCants, Angie Luce, Warren Henricksen (Alissa), Sarah Sheehy (Brendan), Brandy Johnson (Ben), Samantha Tilson (Jamie), Ariel Neumeyer (Will), Austin Christensen, Alan Christensen (Jenna), and Aimee Christensen (Zane Petersen). Greatgrandchildren, Emma and Jace McCants, Skye, Gordon and Carter Luce, Jack Henricksen, Lucas Sheehy, Brynleigh and Bria Johnson, Haley and Jacob Tilson, Wyatt and Josephine Neumeyer, and Lennox Christensen. He is preceded in death by his wife, Opal, his parents Henry and Marie Henricksen, brothers Clark, Roland, Ernie, Dennis and Jerome, sister Lillian Petersen and infant twins.

The family of Leo L. Henricksen created this Life Tributes page to make it easy to share your memories.

Send flowers to the Henricksen family.