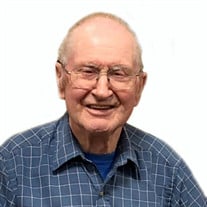 Lester R. Blunk, 83, formerly of Elm Creek and Kearney, died Wednesday, July 11, 2018 at Nye Legacy Health Services in Fremont, Nebraska. Funeral Services will be on Monday, July 16, 2018 at 10:30 a.m. at Horner Lieske McBride & Kuhl Funeral and Cremation Services in Kearney. Rev. Jeff Ryan will officiate and burial will be at the Elm Creek Cemetery. Visitation will be on Sunday, July 15, 2018 from 4:00 p.m. – 6:00 p.m. and also 1 hour prior to services at the funeral home on Monday. In honor of his wife, memorials are suggested to the Leukemia and Lymphoma Society. Online condolences may be submitted by visiting www.hlmkfuneral.com. Horner Lieske McBride & Kuhl Funeral and Cremation Services in Kearney are in charge of arrangements. Lester Roy Blunk was born May 25, 1935, to Ray and Ethel (Sheldon) Blunk. He married Chadean Veal at the First Christian Church in Elm Creek on April 10, 1955. They were married nearly 53 years, until her death on April 5, 2008. Les lived in the Elm Creek area his entire life, farming, working at the Co-op in Elm Creek, and later establishing Blunk Insurance Agency with his wife. He enjoyed spending time with family and friends, and his interests included camping, auctions and following Loper and Husker sports. He became an avid baseball fan later in life. He is survived by sons, Rick (Ginger) Blunk of Elkhorn, NE and Scott (Diane) Blunk of Papillion, NE; grandchildren, Christopher (T.J.) Blunk of Lawrence, KS, Lisa (Brian) Duensing of Elkhorn, NE, Jessica (Brandt) Humphrey of Kansas City, MO and Ashley Blunk of Omaha, NE; great-grandchildren, Riley & Turner Blunk and McKenna, Boston, Preslynn & Brayson Duensing. Additional relatives include Lana (Mike) Christensen of Loup City, NE and family in Nebraska and Idaho. He was preceded in death by his wife; parents; and a brother and sister, both in infancy.

The family of Lester R. Blunk created this Life Tributes page to make it easy to share your memories.

Send flowers to the Blunk family.