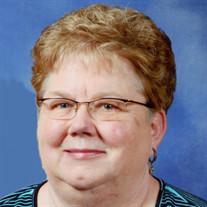 Linda L. Heapy, age 73, of Litchfield, passed away Monday, April 11, 2022 at CountryHouse Residence in Kearney. Funeral services will be 10:00 a.m., Saturday, April 16, 2022 at Faith Lutheran Church in Hazard with Pastor Dean Hanson officiating. Burial will follow at the Litchfield Cemetery. Visitation will be from 5:00 p.m. to 7:00 p.m., Friday, April 15, 2022 at Faith Lutheran Church. Memorials are suggested to the family for future designation. Please visit www.hlmkfuneral.com to leave a tribute or message of condolence. Horner Lieske McBride & Kuhl Funeral and Cremation Services in Kearney are in charge of arrangements. Linda Louise (Japp) Heapy was born to August William Japp and Meta Lillian (Krus) Japp on August 5, 1948, at St. Francis Hospital in Grand Island Nebraska. She attended grade school at Zion Worms School and high school at Palmer Nebraska High School. Her parents raised her on a farm near Worms Nebraska. Linda married David Allen Heapy on July 3rd of 1966 in Worms at Zion Lutheran Church. She moved to Litchfield Nebraska and joined him on the Heapy family farm. David farmed with his parents, Raymon and Mary Alice Heapy North of Litchfield. David and Linda were blessed with their four children. Their family of six lived on the farm for the next 55 plus years. David and Linda’s family grew with spouses and grandchildren. Survivors include her husband, David of Litchfield; son Greg Heapy of Litchfield; son Curtis (Maria) Heapy of Curtis and their children, Raeann, Samuel and Stella; son Steven (Dawn) Heapy of Litchfield and their children, Michael, Faith, and Jacob; their only daughter, Janel (Heapy) Lange of Elm Creek and her daughters, Elizabeth and Abigail. Linda was preceded in death by her parents, August and Meta Japp; her in laws, Raymon and Mary Alice Heapy; brother-in-law, Loren Hackbart and a sister-in-law Eldonna Small.

The family of Linda L. Heapy created this Life Tributes page to make it easy to share your memories.

Send flowers to the Heapy family.