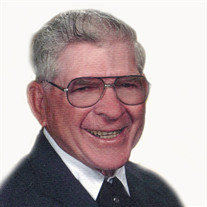 Lloyd W. Wintermote, 88, of Kearney, passed away peacefully September 23, 2018 at CHI Health Good Samaritan Hospital in Kearney. Funeral services will be 10:00 a.m., September 27, 2018 at Trinity Lutheran Church in Amherst with Pastor Bill Heermann officiating. Burial will be 3:00 p.m. at the Chambers Cemetery. Visitation will be from 5:00 to 7:00 p.m., September 26, 2018 at Horner Lieske McBride and Kuhl Funeral Chapel, and prior to the service at the church. Memorials are suggested to Trinity Lutheran Church or the Alzheimer’s Association. Lloyd was born August 16, 1930 in Cheyenne, Wyoming to Clarance and Cleona (Harkins) Wintermote. He graduated from Chambers High School. Lloyd married Betty Thorin on January 26, 1951 in West Point, Nebraska. They lived in Chambers, where Lloyd worked as a blacksmith and welder. They moved to Kearney in 1960 and Lloyd went to work for Caldwell Manufacturing. In 1975 Lloyd began working for the State Department of Roads until he retired in 1995. Lloyd was a member of Trinity Lutheran Church in Amherst. He enjoyed drawing, wood carving, flying airplanes, and horses. Lloyd is survived by his wife, Betty Wintermote of Kearney; daughters, Norma and Jeff Pearson of Overton, NE, Janet and A.J. Gardner of North Platte, NE; brother, Leonard and Sandra Wintermote of Elm Creek, NE; 6 grandchildren and 12 great grandchildren. Lloyd was preceded in death by his daughter, Donna Marie; son, Lee Allen; and brother, Arthur Wintermote.

The family of Lloyd W. Wintermote created this Life Tributes page to make it easy to share your memories.

Send flowers to the Wintermote family.