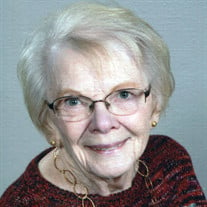 Lois C. Walters, 84, of Kearney, died Thursday, July 4, 2019, at Brookdale Kearney Northridge in Kearney. Funeral services will be on Tuesday, July 9, 2019 at 10:30 a.m. at First Lutheran Church in Kearney. Pastors Rick and Michelle Carlson will officiate and burial will be at Kearney Cemetery. There will be no visitation. Memorials are suggested to First Lutheran Church. Lois was born on December 11, 1934 to Erwin A. and Edna E. (Anderson) Rehfeld in Aberdeen, SD. She attended high school in Warner, SD and graduated in 1952. She then attended South Dakota State University in Brookings, SD., where she earned a bachelors degree in home economics. She married Donald J. Walters on June 2, 1956 in Warner, SD. Lois and Don would later move to Kearney, NE where Lois taught Home Economics at Overton, NE High School. After staying home for several years to raise her children, Lois went back to work as a secretary for the Kearney Public School nurses. Lois ended her career as a bookkeeper for their business, Spohn Oil company, where she retired in 1998. She was a member of First Lutheran Church in Kearney. She enjoyed cooking, gardening, quilting, and traveling. But most of all, she loved spending time with her children, grandchildren, and great-grandchildren. Lois is survived by her daughters, Sharla (Jim) Mruz of Bellevue, NE, Shelley (Brad) Hilker and Shari Walters all of Kearney; brother, Keith (Lee) Rehfeld of Hudson, WI; brother in law, Rick Walters of Rapid City, SD; 6 grandchildren, Kelsey (Andy) Ostrander, Andrew, Julia and Patrick Mruz, Nicole and Nicholas Walters; 4 great grandchildren; 4 nephews; other extended family and friends; her beloved dog, Sadie. She was preceded in death by her husband, Don; son and daughter in law, Mike and Jill Walters.

The family of Lois C. Walters created this Life Tributes page to make it easy to share your memories.

Send flowers to the Walters family.