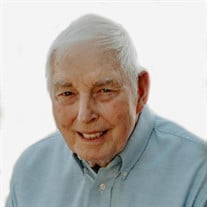 Lynn Martin passed away at his home on May 1, 2021 from a long battle with Parkinson’s disease. He was surrounded by his family. Funeral services will be at 2 pm Thursday, May 13, at First Baptist Church in Kearney. Pastor Sean Dougherty will be officiating. Burial will be in the Pleasanton Cemetery. Visitation will be from 5 to 7 pm on Wednesday at Horner Lieske McBride & Kuhl Funeral Home. In lieu of flowers, memorials are suggested to the Pleasanton Fire Department or the Kearney Public Library. Online condolences may be submitted by visiting www.hlmkfuneral.com. Horner Lieske McBride & Kuhl Funeral and Cremation Services in Kearney is in charge of arrangements. Lynn was born on November 5, 1941 to Clayton and Grace (Zeilinger) in Kearney, Nebraska. Lynn graduated from Pleasanton High School in 1959 as Valedictorian of his senior class. He attended Kearney State Teachers College, graduating in 1963. He began his teaching career, teaching math and science, at Amherst High School. He taught there for nine years and then one year at Centura Public School. He greatly loved teaching, especially the advanced math and science classes. As much as he loved teaching, he left to begin his second career as a fulltime farmer. He farmed with his brother, John, and nephews, John C. and Charles, until he was no longer able. Lynn married Sandra Schultz of Arcadia, Nebraska on April 12, 1968. To this union, two daughters were born, Amy and Christine. Lynn greatly loved farming and his home and family. He grew up south of Pleasanton, Nebraska and lived in his childhood home until his death. He traveled some to visit his daughters and his grandchildren, but his heart was always with his home and being able to be outside and farm. He liked to take his grandchildren on 4-wheeler rides and tour the farm. He enjoyed playing games with the grandkids, favorites were pitch and checkers. He loved to read westerns, especially by his favorite author, Louis L'Amour. He loved a good joke and telling them, but they were often anti-climatic as he could never remember the punch line. The last place Lynn traveled to was Branson, MO to celebrate his and Sandy’s 50th wedding anniversary. His daughters, sons-in-law, and grandchildren joined them to help make it a very special celebration. Lynn belonged to the Farmers Union and R-Calf. He served on the Rusco Township board for many years. He is survived by his wife, Sandra; daughters, Amy (Lynn) Mayhew, Christine (Milo) Knezevic; grandchildren, Samuel Mayhew, Olivia Mayhew, Emma Knezevic, and Aleksandar Knezevic; brother, John and sister-in-law, Sharon; nephews, John (Leslie) Martin and Charles (Julie) Martin; great nephew, Jedidiah; great nieces, Jenna (Tanner) Palu and son, Tasen, and Lani Martin. Brother-in-law, Ken (Sandy) Schultz and Dick Schultz; Sister-in-law, Sharon (Don) Harvey and Deb Schultz, and nieces, nephews, cousins, and friends. Lynn was proceeded in death by his parents, Clayton and Grace, mother-in-law and father-in-law, Olive and Edgar Schultz, and brother-in-law, Donald Schultz.

Lynn Martin passed away at his home on May 1, 2021 from a long battle with Parkinson&#8217;s disease. He was surrounded by his family. Funeral services will be at 2 pm Thursday, May 13, at First Baptist Church in Kearney. Pastor Sean Dougherty... View Obituary & Service Information

The family of Lynn L. Martin created this Life Tributes page to make it easy to share your memories.

Send flowers to the Martin family.