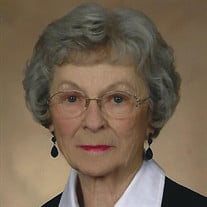 Maevis Bahde, 95, Omaha, formerly of Kearney, passed away January 6, 2021 at Brookstone Meadows in Omaha. Memorial Service will be 1:30 pm, January 19, 2021 at Horner Lieske McBride & Kuhl Funeral and Cremation Services with Pastor Michelle Carlson officiating. Burial will follow the service at Kearney Cemetery. Masks are required to be worn for those attending the service. Memorials are suggested to the First Lutheran Church Radio Fund. Maevis was born August 28, 1925 in West Point, Nebraska to John and Carrybel (Baumer) Schroeder. She graduated from Wakefield High School. She married Donald Bahde on March 24, 1946 in Wakefield. They moved to Hastings, where Donald worked for Standard Oil Company. In 1952 they moved to Kearney, and Maevis was the office manager for family owned Bahde Oil Company. She retired in 1985. Maevis was an avid bridge player. She enjoyed playing every week with a group of women from the Kearney area. Maevis also donated her time at the First Lutheran Church with the quilting group. She also enjoyed working in her flower garden. Maevis was thrilled when all of her hard work was recognized by the Kearney Sertoma Club and she won the Yard of The Month. She was a great cook and especially loved to prepare wonderful feasts for her family and friends during Thanksgiving and Christmas. Maevis is survived by her children, Richard and Reeann Bahde of Omaha, NE, Pamela and Steve Coffman of Omaha, NE, Jeff and Jackie Bahde of Littleton, CO; grandchildren, Carrie and John Hjelle, Dawn and Jim Lusk, Conner Bahde, Taylor and Richard Moya, Kelly and Ryan Gray, Matt and Andrea Coffman; and 14 great grandchildren. Maevis was preceded in death by her husband Donald, sisters, Bonnie Bressler and Alice Schroeder, brothers, Kenneth and Jack Schroeder.

The family of Maevis A. Bahde created this Life Tributes page to make it easy to share your memories.

Send flowers to the Bahde family.