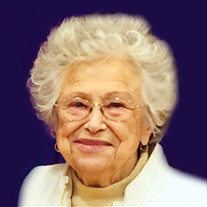 Margareta Dutko, 88, Formerly of Lisco, Nebraska, passed away Monday, November 12, 2018 at the Good Samaritan Society-St. John’s Nursing Home in Kearney. A vigil wake service will be held 4:00 p.m., Friday, November 16, 2018 at Horner Lieske McBride & Kuhl Funeral Chapel in Kearney with Fr. Art Faesser officiating. A Mass of Resurrection will be held 10:00 a.m., Saturday, November 17, 2018 at St. Gall’s Catholic Church in Lisco with Fr. Rayappa Pasala and Fr. Art Faesser officiating. Burial will follow the service at Lisco Memorial Cemetery. Memorials are suggested to St. Gall’s Catholic Church or to the family to be designated later. Marga was born on September 29, 1930 in Herzogenaurach, Germany, to Kaspar and Katharina (Wein) Hertwich. After WWII, the Americans took over the large air base on the edge of Herzogenaurach, and Polish soldiers who had been German prisoners of war joined the Civilian Labor Corp and were stationed at the Herzo Air Base. Marga met a handsome Military Policeman, Mikolay Dutko. On May 14, 1949, they were married in Herzogenaurach. In 1951, displaced persons were given the opportunity to relocate to the United States or Australia. The Dutko’s chose the United States, making that journey on the USS General Butler, a military ship used during the Korean War to transport troops. The Catholic Relief Society helped the family find employment at the John McGinley ranch north of Lisco. In 1960, the Dutko family moved to Lisco to work for Rush Creek Land and Cattle Co. Six years later, the couple bought the Mobil Station from Glen Barnwell. Marga filled in pumping gas and checking oil at the station when Mike was delivering fuel to farmers and ranchers, AND she would still have a hot meal ready when he returned home. Marga and Mike operated the Dutko Service Mobil Station from 1966 until 2002, when they retired. Marga was active in several bridge and pinochle clubs. She learned to sew beautifully, even helping make her daughter’s wedding dress; made quilts for grandchildren; and knitted, starched and stretched beautiful doilies from old German patterns that were often given as wedding presents. She enjoyed goose hunting and fishing with her husband. Target shooting was always an even competition between the two of them. Marga was not discriminatory, was fair and kind to everyone, and always had room for another one or two people at the dinner table. Marga was magical in the kitchen and loved to cook and bake, especially around the holidays. Tradition would dictate that on the day after Thanksgiving she would make Christmas cookies from her favorite German recipes with her grandchildren and great grandchildren. Her grandchildren and great grandchildren were a great source of pride and her number one priority. Marga’s hospitality and quiet kindness were well known. When roofers were at work on her house, she invited them in for coffee and cake. They told their boss that was the first time anyone had ever done that. A couple weeks later, the owner stopped by her house and thanked her for her kindness to his crew. That was not unusual for Marga, and she kept it quietly to herself. She was a stickler for playing by the rules and would be very vocal if she felt procedure was not being followed. Survivors include her daughter, Karin Covalt of Kearney; her grandchildren, Misha Covalt of Kearney, Mike Covalt and his wife, Becky; and three great-grandchildren, Anna, Drew, & Abby Covalt, all of Seward; and one brother, Heinz Hertwich of Herzogenaurach. She was preceded in death by her husband, her parents, and two sisters, Elisabeth Hertwich Sierat who died earlier this year, and Wilhelmina Hertwich who died in WWII.

The family of Margareta "Marga" Dutko created this Life Tributes page to make it easy to share your memories.

Send flowers to the Dutko family.