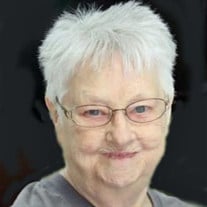 Marilyn M. Traver, 83, of Kearney died Monday, September 9, 2019 at Kearney Regional Medical Center. Funeral services will be Monday, September 16, 2019 at 10:30 a.m. at First United Methodist Church in Kearney. Rev. Kayla Mangrich will officiate and burial will be at the Riverdale Cemetery. Visitation is planned Sunday from 4:00 – 6:00 p.m. at Horner Lieske McBride & Kuhl Funeral and Cremations in Kearney or prior to services at the church. Memorials are suggested to the family to be designated at a later date. Please visit www.hlmkfuneral.com to leave a tribute or message of condolence. Arrangements are under the direction of Horner Lieske McBride and Kuhl Funeral and Cremation Services in Kearney. Marilyn was born July 10, 1936 in Amherst, NE to M. B. “Shorty” and Ruth (Ansbach) Williams. She grew up in Miller, NE and graduated from Miller High School in 1954. She moved to Michigan in 1961 the back to Miller in 1962 then moved to Kearney in 1965 and worked as a nutritionist supervisor at St. John’s Good Samaritan Center from 1969 to 1981 and then at Good Samaritan Hospital until retiring in 2004. She enjoyed flowers, NASCAR, WWF Wrestling, jigsaw puzzles, football and especially spending time with her grandchildren and great grandchildren and an occasional red beer. Surviving relatives include daughters, Nancy Johnson and husband Larry of Litchfield, NE, Lori Bailey of Kearney and fiancé, Terry Simmons; son, James Traver of Kearney; 10 grandchildren; 24 great grandchildren; sister, Kathy Ross and husband Lee of Miller, NE and brother, Dick Williams and wife Beverly of Elm Creek, NE. She was preceded in death by her parents; sisters, Carolyn Hazzard and Evelyn Poland; brother, Don Williams and son-in-law, Kevin Bailey.

The family of Marilyn M. Traver created this Life Tributes page to make it easy to share your memories.

Send flowers to the Traver family.