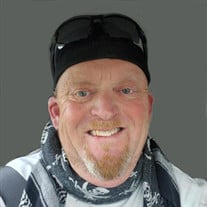 Marlin Gene Trucano, age 57, of Kearney, passed away Saturday, September 4, 2021, at CHI Health Good Samaritan Hospital in Kearney from Covid complications. Funeral services will be 11:00 a.m., Thursday, September 9, 2021 at the Kearney eFree Church with Pastor Todd Marcy officiating. Graveside inurnment will be 2:00 p.m., Saturday, September 11, 2021 at the Fairview Cemetery in Rushville, Nebraska with Pastor Paul Smith officiating. Visitation will be 5:00 p.m. to 7:00 p.m., Wednesday, September 8 at Horner Lieske McBride and Kuhl Funeral Home. Memorials are suggested to the family to be designated later. Please visit www.hlmkfuneral.com to leave a tribute or message of condolence. Horner Lieske McBride and Kuhl Funeral and Cremation Services in Kearney is in charge of arrangements. Marlin, son of Rev. Alvin and Sharon Trucano, was born May 11, 1964 in Humboldt, NE. He grew up in different areas in NE, as his dad moved from parish to parish, but he always felt the Kearney area was ‘home’. When he was a senior in high school, he and his family moved to Hay Springs, NE, where his dad was the Pastor of the Hay Springs and Rushville United Methodist Churches. Marlin worked for Rabeler Chevrolet in Rushville. He graduated from the Hay Springs high school in 1982. Then moved back to Kearney to attend college as a music major. He played trumpet and worked as a DJ. But realizing school wasn’t really his thing; he worked at several jobs including Broadfoot Sand and Gravel, Lederman’s and Yellow Freight until he got a job with Brown Transfer in Kearney, Feb 7, 1997. At the time of his death, he was a senior line-haul driver and drove from Kearney to Omaha twice a day delivering freight. In 2015 he was awarded ‘Top Senior Driver of the Year’, and he competed in Truck Driving Championships several years winning a number of trophies. He and Stephanie Storovich were married in Jamaica in 1998 and bought an acreage and home outside of Kearny where he lived until the time of his death. Marlin was passionate about many hobbies. Throughout his life he loved photography, playing trumpet, fishing, hunting, archery, mountain biking, writing poetry, Harley Davidsons, collecting movies, loving his cats and supporting Eileen’s Cookies. He became a member of the Evangelical Free Church of Kearney in 2020 and attended church there regularly. Marlin is survived by his mother, Sharon Trucano; his stepmother, Jean Trucano; his sister, Bonnie (Denver) Hartwell; his ex-wife but best friend, Stephanie Trucano; nephews Toby (Gretchen) Johnson, Garrick Antillon, Danny (Aide) Harms, and David (Christina) Giacalone; niece, Sheena (Jeremy) Morris; stepbrother Jim (Tiffany) Forster; several great-nieces and nephews and many cherished friends. He was preceded in death by his father, Alvin and his stepfather, Tony Sabala.

The family of Marlin G. Trucano created this Life Tributes page to make it easy to share your memories.

Send flowers to the Trucano family.