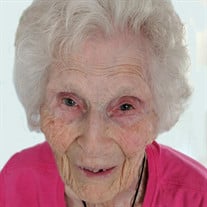 Mercedes Jean Michels, age 91, of Kearney, passed away Thursday, August 13, 2020 at her home. Family graveside services will be 10:00 a.m., Saturday, August 15, 2020 at the Curtis Cemetery in Curtis, Nebraska. There will be no visitation. Memorials are suggested to the Kearney Homeless Shelter or the Salvation Army. Please visit www.hlmkfuneral.com to leave a tribute or condolence. Horner Lieske McBride & Kuhl Funeral and Cremation Services in Kearney is in charge of arrangements. Mercedes was born December 12, 1928 in Curtis, to Oscar and Lela Westfall. She excelled in music, playing the French Horn in high school band, and the drums in the military band. She quickly became band captain, which gave her the joy of conducting on occasion. Merce was thrilled to be part of the National Honor Band. On August 15, 1953, she married Thomas Michels in Curtis. They lived in Lincoln for a few years, where she worked as a secretary and played horn in the Lincoln Symphony before moving to Kearney where she played in the City Band. Merce, a proud American, enjoyed working the voting booths and donating blood to the Red Cross. During the war, she loved volunteering at the North Platte Canteen. Mercedes will be deeply missed as her family’s prayer warrior, emotional defender and up lifter, nurturer, teacher and celebrator. She could lift anyone’s spirits and guide them at the same time, never judging and always unconditionally loving. It is well with her soul. She is survived by her three children; Alan (Margaret) Michels of Payson, Arizona, Helen (Paul) Lange and Kelly (William) Schellhase both of Kearney; eight grandchildren; and nine great-grandchildren. She was preceded in death by her parents, husband, and a brother, Alan Westfall.

Mercedes Jean Michels, age 91, of Kearney, passed away Thursday, August 13, 2020 at her home. Family graveside services will be 10:00 a.m., Saturday, August 15, 2020 at the Curtis Cemetery in Curtis, Nebraska. There will be no visitation.... View Obituary & Service Information

The family of Mercedes J. Michels created this Life Tributes page to make it easy to share your memories.

Send flowers to the Michels family.