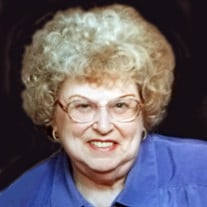 Mildred (Millie) M. Nienaber, 96, of Kearney died peacefully on October 8, 2018 in Colorado Springs, CO. Mass of Christian Burial will be Tuesday, November 6, 2018 at 10:30 a.m. at St. James Catholic Church in Kearney, preceded by a rosary at 9:45 a.m. Father Art Faesser will officiate, and inurnment of ashes will be at Kearney Cemetery. A luncheon will follow at St. James. Memorials are suggested to the Nebraska Veterans Home in Kearney. Please visit www.hlmkfuneral.com to leave a tribute or condolence. Horner Lieske McBride & Kuhl Funeral and Cremation Services in Kearney are in charge of arrangements. Millie was born November 29, 1921 in Lincoln, NE to Jerry and Anna (Pokorny) Maixner. She grew up in the Lincoln/Omaha area and graduated from Beatrice High School in 1939. She then attended St. Elizabeth School of Nursing. On March 9, 1943 she married Andrew P. Nienaber in Omaha. Millie and her husband, Andy, lived in Holdrege and Lexington where he worked for private aviation flying services before moving to Kearney in 1954 and establishing Andy’s Air Service. They owned and operated the fixed base air service operation until retiring in 1985. Millie was actively involved in the business doing the bookkeeping and billing, waiting on customers, flagging down and fueling aircraft, and operating the Unicom radio service with pilots for runway landing instructions, current weather readings, and general information. She was a weather observer for the Department of Aeronautics from 1955 – 1980. This entailed taking weather readings throughout the day, seven days a week, with no days off. She received a National Centennial Award from the United States Department of Commerce and the Department of Agriculture for being a part of the Cooperative Weather Station Network in 1990. Millie belonged to the Beta Sigma Phi women’s club in Kearney for many years. She was a member of St. James Catholic Church in Kearney. Millie is survived by sons David Nienaber of Broken Bow, NE, Derald Nienaber of Lincoln, NE, and daughter Denise Hainault and husband David of Colorado Springs, CO; grandchildren: Cyndi Nienaber of Shakopee, MN, Kirt Whitney of Denver, CO, Christie Klingenberg and husband Adam of Lincoln NE, Christopher Hainault and Krystal of Colorado Springs, CO; great grandchildren: Melissa Nienaber of NE, Mariah Nienaber of Shakopee, MN, Chase and Caiden Bivens and Colt Klingenberg all of Lincoln NE, and Michelle and Matthew Hainault of Colorado Springs, CO. She is also survived by numerous nieces, nephews and cousins. She was preceded in death by her husband in 1994, and two brothers: Bob Maixner of Hobbs, NM and Jerry Maixner, Jr. of Austin, TX.

The family of Mildred M. Nienaber created this Life Tributes page to make it easy to share your memories.

Send flowers to the Nienaber family.