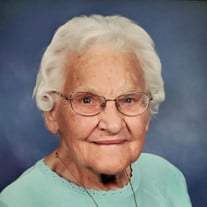 Norma Ruth Murray, 98, Hastings, formerly of Kearney died Thursday, July 23, 2020 at Good Samaritan Society Hastings Perkins Village. Funeral services will be 11:00 a.m., Thursday, July 30, 2020 at the First United Methodist Church in Kearney with Pastor Alan Davis officiating. The service will be live streamed for those unable to attend. Please visit kearneyfirstumc.sermon.net/special to view the service. For those planning on attending, a mask is recommended. Burial will be 2:00 p.m., Thursday, July 30, 2020 at the Westlawn Memorial Park Cemetery in Grand Island with Jim and Josie Weldon officiating. Visitation will be 4:00 p.m. to 6:00 p.m., Wednesday, July 29, 2020 at Horner Lieske McBride & Kuhl Funeral Home in Kearney. Memorials may be made to the First United Methodist Church in Kearney or Kearney YMCA. Horner Lieske McBride & Kuhl Funeral and Cremation Services in Kearney is in charge of arrangements. Ruth was born February 12,1922 to Glenn Grant and Esther Verna (Wieseman) Shelmadine, in Silver Creek, Nebraska where she attended school until her junior year. Her senior year the family moved to Kearney, Nebraska, where she graduated in 1940 from Kearney High School. In 1941 she was accepted into Mary Lanning School of Nursing and graduated in 1944. She practiced her profession with passion and excellence for 40+ years. The last 25 years of her career as a nurse were spent at Good Samaritan Hospital in Kearney as charge nurse and head of a floor where her expertise was known and appreciated by nurse colleagues and medical professionals alike. She retired in 1987. Ruth married her high school sweetheart and the love of her life, Gene R. Murray, on December 3, 1944 at the First Methodist Church in Kearney. They celebrated 51 years of marriage together until Gene preceded her in death in 1996. To this union 3 children were born, Edward, Shelley and Marlys. Her Christian faith was a significant part of her life, and she was a very active member of the First Methodist Church of Kearney, serving on many councils and committees. She was a part of the Open Circle Sunday School Class and also helped teach younger classes in the church. She was active in the Parent-Teacher Association of her children’s schools, leader of a Girl Scout Troop and Job’s Daughters. In her retirement, she enjoyed volunteering at the hospital and was an active member of the YMCA (water aerobics was her favorite until she was 90 years old). She loved every minute of watching her grandchildren at their sporting events, school programs and church functions. She was very proud to say that she attended every grandchild’s wedding in the USA and Austria. After retirement Gene and Ruth loved to travel and celebrated their 50th anniversary with one of their beloved Caribbean cruises where they were still dancing in each other’s arms. Left to cherish her memory are son, Edward Murray (Coralee) of Budapest, Hungary; daughters, Shelley Pryal of Hastings, Nebraska and Marlys Kossman (Kirk) of Kearney, Nebraska; 10 grandchildren; 23 great grandchildren; and many other relatives, nieces, nephews, and friends. Ruth was preceded in death by her husband, Gene Murray; sister, Lucille Marks (Leslie) and identical twin sister, Nona Helen Ruff (Eugene); her brothers, Phillip Shelmadine (Helen) and Max Shelmadine; and her nephews, Richard Marks and Alan Ruff. At her 90th birthday she wrote, “I have been thankful for every day I can get out of bed, have a warm place to live, can cook my meals and drive a car”

The family of N. Ruth Murray created this Life Tributes page to make it easy to share your memories.

Send flowers to the Murray family.